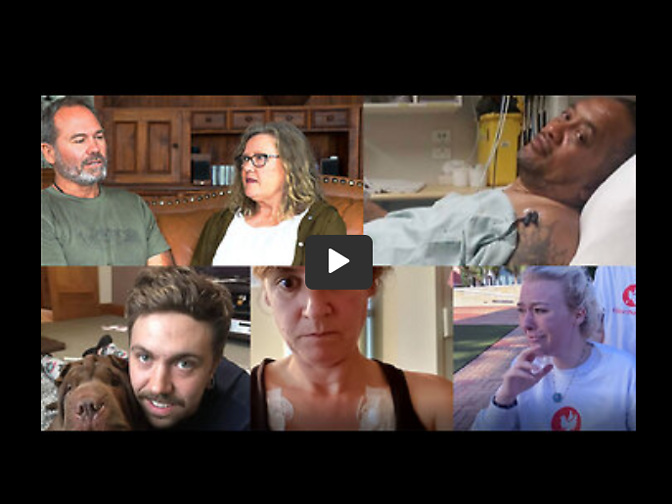 A powerful story of the “Memorial Day” event, and the delivery of a petition to New Zealand’s Parliament in Wellington.

Brave injured people and their families gather together to share their grief and suffering at a memorial service for Rory Nairn, who died as a result of the newly invented pharmaceutical. all those who have suffered injury. This peaceful event is interrupted by a large police presence, low flying helicopters and police photographers snapping images of the sick and suffering, some in wheelchairs, for “intelligence gathering purposes.”

This is a story of a simple want for acknowledgement from government, media and medical fraternity of the injury and death caused by a newly invented pharmaceutical.

The documentary follows the stories of Casey Hodgkinson, Rob Martin and Sarah Carter, along with the first ever interview with Brett and Chris Nairn, parents of Rory Nairn, who lost his life to myocarditis in November 2021. His death was confirmed by the coroner as caused by the newly invented pharmaceutical, which had been mandated and forced onto the New Zealand public, through their work places and their everyday lives.

Last Christmas, people were intentionally divided and separated from their families at the encouragement of the New Zealand Government and its media propaganda machine. People were influenced to exclude family and friends who did not agree to take this newly invented pharmaceutical. Many injured have suffered the double insult of their friends and families turning their backs, and with doctors either not knowing what to do, or ignoring with fear of retribution from peers and medical boards, or just not caring at all.

This Christmas is the perfect time to release this documentary, so that families and friends can support their injured family members, and that those who see no wrong in this product can look deep inside themselves and find empathy for those that’s outcome from taking this newly invented pharmaceutical, which has been incredibly devastating to their health and has caused loss of life.

The fourth ‘official’ death from myocarditis caused by the newly invented pharmaceutical was reported in the New Zealand media on the December 14, but without any details of the victim’s age or sex. Why? The injured New Zealanders ask for simple public acknowledgment without ‘gaslighting,’ along with medical acknowledgement and support.

Empathy has been critically missing in these stories, and for all of the now 65,148 New Zealanders who sustained an injury from this pharmaceutical (note: Medsafe report #46 excludes the other brand of pharmaceutical used which shows 319 AEFI Reports *report #45). The two products combined have officially now caused four deaths (with others still under investigation) and a total of 65,148 reports, of which 3,709 are ranked serious.

As Chris Nairn says in the documentary: “Find your strength with others and don’t be shut down and isolated. Find people that will support you and hear your story because you are one of many.”

And as the Nairn family spend their Christmas without their son Rory, Brett Nairn expresses some of the comfort that Rory’s story is being told.: ”I feel like there’s purpose in this, as tragic and terrible as it is. Rory hasn’t died in vain, that’s why we want to tell people what’s happened. That’s why we want to share.”

To Jacinda Ardern, all those in parliament and the mainstream media this Christmas, the final word from Casey Hodgkinson: “You say ‘be kind.’ Where is that kindness? We trusted you, you used that and it really hurts. We are just people dealing with so many horrible things and you put so much more hurt on us and maybe you don’t understand or maybe that’s just ignorance, but it’s time to try to understand and be compassionate and ‘be kind’.“

“I would like to dedicate this documentary to my late mother Judy who sadly passed on the 8th of December 2022. She was my rock and was extremely proud of everything I’ve done to support the injured and lost loved ones. My mother the woman who made me who I am today, love you forever mum. Our guardian angel.” – Anna Hodgkinson

We are giving the documentary to everyone via the dropbox link below, and on platforms where you can watch and download and upload to all platforms you have.

These New Zealanders deserve their story to be told!

Youtube has already banned this video from upload though we are appealing this decision.

Here is a download of the documentary. We invite all to download the video and upload to any platform you wish to. The video can also viewed on our website and social media platforms .

We are Silent No More!