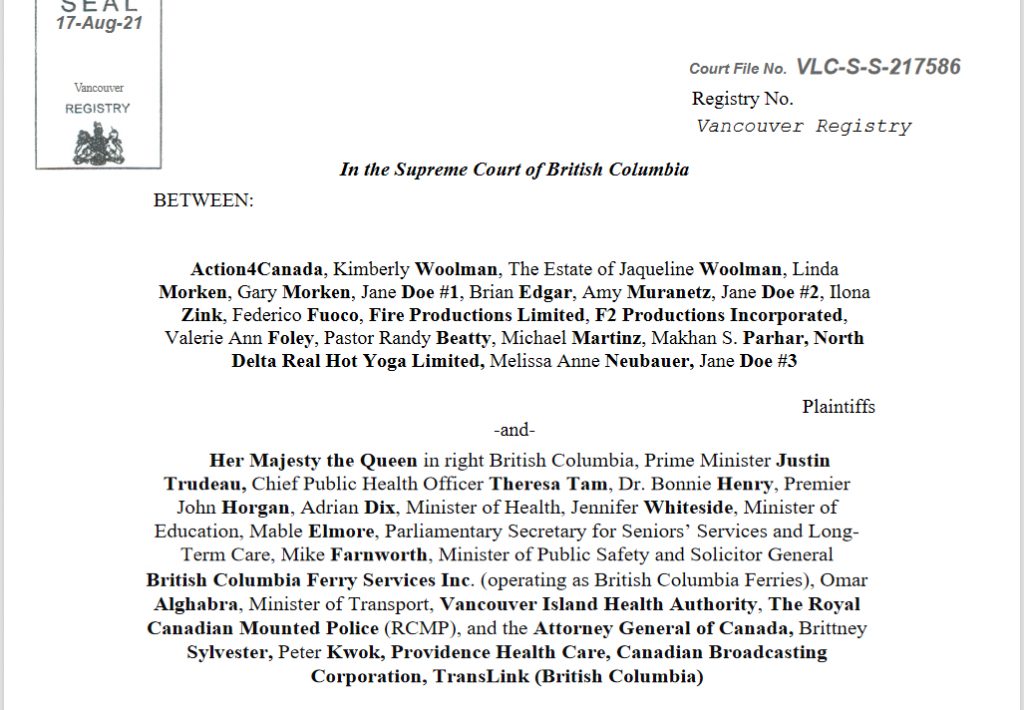 PRESS RELEASE
Action4Canada and the Constitutional Rights Centre believe the government is infringing on human rights and have exceeded their authority causing irreparable harm. Their actions appear to constitute criminal negligence, breach of trust, incitement of hatred, crimes against humanity committed against our elderly, our children and society at large, by withholding life-saving treatments, causing extreme psychological trauma due to the ordering of isolation, lockdowns, masking, social distancing and, without making full, true and plain disclosure of the known risks thereof, mandating and promoting dangerous experimental medical injections which they know, or ought to know, cause adverse reactions and death.
The government’s dictatorial and unlawful measures and their out-of-control spending, in response to COVID-19 are further destroying our businesses, our communities, and our economy. Many small businesses have been forced to close. Furthermore, the escalating national debt is putting the future of our children and grandchildren at risk.

The measures are in violation of the Constitution and nearly every section of the Charter of Rights and Freedoms. Canadians have “guaranteed” rights. Such as Section 7 of the Charter and 1(a) of the Bill of Rights; “the right to life, liberty and security of the person and the right not to be deprived thereof except in accordance with the principles of fundamental justice”.
The government’s actions are putting our sovereignty, national security, and our democracy at risk .

On August 16th, 2021, Action4Canada formally filed legal action in the BC Supreme Court, which was issued by the court on August 17th and communicated to the plaintiffs on August 20th, by the court,  to hold multiple parties accountable for their actions with respect to COVID-19 measures. The defendants include: the Government of Canada, the Government of British Columbia, various public health officers, the Canadian Broadcasting Corporation, and others. Action4Canada is committed to defending faith, family and freedom.
To View Filed Court Case Click HERE

5 Reasons Why B.C. Decriminalizing Hard Drugs is a Terrible Idea

The Predators Among us with Dr. Ann Gillies – Action4Canada

Tanya Gaw is joined by Ann Gillies, PhD, a trauma specialist and ordained pastor, to have a frank conversation about the “Damage Done by the Predators Among Us.” The world has gone mad as citizens fall prey to the rising normalization of perversion in our society, grooming our children to accept pedophilic interests. Dr. Gillies provides a historic, academic and social overview of pedophilia and the sexualization of our children.

Dr. Gillies is founder of www.restoringthemosaic.ca, a ministry which seeks to educate and inform politicians, community leaders and pastors across Canada to Restore the Mosaic of our God given identity: individually and nationally.
More about Dr. Ann Gillies https://action4canada.com/empower-hour-dr-ann-gillies-pedophilia-feb-1-2023

Insidious Predators Among Us https://action4canada.com/the-insidious-predators-among-us

Action4Canada is a grassroots movement reaching out to millions of Canadians and UNITING our voices in opposition to the destructive policies tearing at the fabric of this nation. Through Call To ACTION campaigns, we equip citizens to take action. We are committed to protecting…FAITH, FAMILY and FREEDOM.
Thank you to our donors, volunteers & supporters
https://action4canada.com/message-to-a4c-donors-volunteers-supporters

Everything The [DS] Has Done Leads To Election Interference,Clean House Is Very Important – X22 Report

Everything the [DS] has done up to the point has proven Trump’s case of election interference. The FBI,CDC,FDA,fake news and the corrupt politicians were all involved in it. The case is building and building and soon they will have to give back the diamonds. The house is now clean, those who were on committees are no longer. The [DS] is now in the process of removing [JB] while protecting themselves, they are panicking and falling right in to the Trump trap. 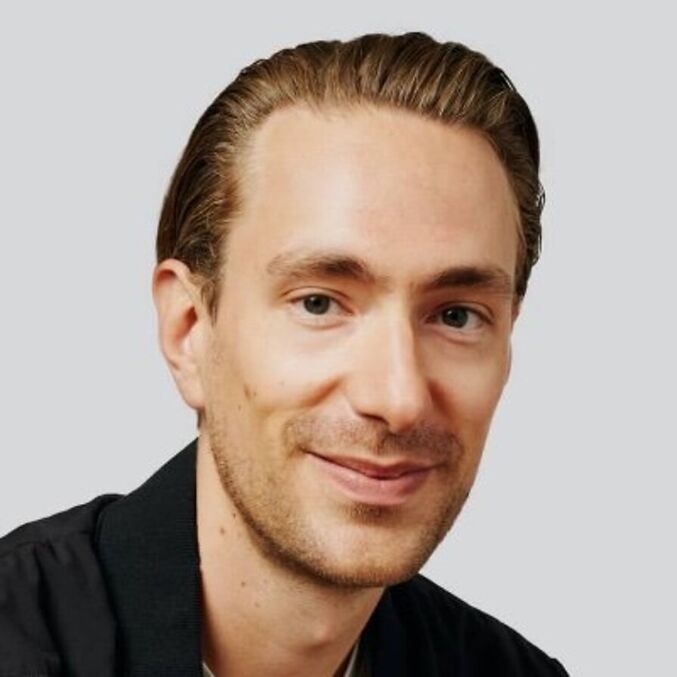 Victoria’s Capital Daily was profitable, popular and a critical darling. Then the owners of Overstory Media Group fired most of its staff

“When we look at these communities, our goal is to be around for the next 30 or 40 years,” explained Farhan Mohamed in a friendly 2021 Guardian profile. “We think in a generational sort of way.”

As it turned out, the honeymoon was closer to 18 months for the CEO and co-founder (with billionaire Andrew Wilkinson) of Overstory Media Group.

As recently as last year the pair were promising to revitalize local journalism across Canada, and committing to a model that would eschew short-term profit-based thinking. Some wondered aloud if these brash tech bros could be the solution to what ailed local news.

On Monday Capital Daily, an innovative and award-winning local outlet in Victoria, B.C. that the Guardian described as Overstory’s “marquee brand,” was gutted like a fresh trout.

In a move that sent shockwaves through the country’s journalism community four of the outlet’s seven full time staff members were fired, including managing editor Jimmy Thomson. As many as six other employees or contractors had already been fired or seen their contracts go unrenewed over the past few months. An award-winning outlet that routinely punched well above its weight and broke major stories, flopping around on the deck. Bleeding out.

Is Trudeau Setting Up A Communist-Style Theft of Canadian Farmland? by Brad Salzberg “The Dutch government is offering to buy-out up to 3,000 peak polluter farms in an attempt to reduce nitrogen oxide emissions that are illegal under EU law.”

Including Canada, of course. Upon which concerned citizens might consider an idea cast aside by Canadian media. Under the guise of “environmental concern,” the Dutch government maintains an excuse to seize national farmland.

“There is something happening in the Netherlands that if anything closely resembling it were happening in Canada, it would surely be called an insurrection.”

It will be called nothing of the sort. CBC, CTV, Globe & Mail et al will call it exactly what PM Justin Trudeau wants it be called: “Net Zero” being the chosen nomenclature.

As such, historical references to similar processes of the past are off-limits. Pourquoi?  Because the dynamic is classic communism– that’s why.

Guided by the work of Dr. David E. Martin, Plandemic II: Indoctornation, alleges a three decade-long money trail that leads directly to the key players behind the COVID 19 pandemic.

The first PLANDEMIC, a 26 minute documentary, has been seen by over one billion people worldwide, setting a historic record.

The series is accredited for being first to warn the world of the crimes against humanity that are now being brought to light.

PLANDEMIC 3: THE GREAT AWAKENING is currently in production, scheduled for world-wide release Fall 2022.

Annabel Purcell had a rough go, but has made the best of an unfortunate situation. When she was five, Annabel suffered a stroke that left her with some debilitating conditions. Despite this she kept on trucking through life one day at a time, keeping the best of spirits and contributed to society as well or better than any of us could. Her disabilities have put her in a situation where doctors gave her no other choice than to retire early, but with government cutbacks and an unwillingness to fund the social safety net we were all promised, Annabel has found herself lacking what she needs to survive. The government’s response has been to offer people like Annabel a way out via Euthanasia. Support Annabel on her journey to Ottawa: https://www.givesendgo.com/G9R1M?utm_…

On tonight’s Dr. Jane Ruby Show, Atty Todd Callender reveals the approved, and activated patent on the 10 genetic codes in the Johnson and Johnson C 19 shots that are programmed for the turbo cancers, HIV infections, and destruction of the human immune system. This is the doctor Jane Ruby show and you’re about to enter truth in medicine.

THE US DEPARTMENT OF DEFENSE IS BEING EXPOSED FOR PERPETRATING THE COVID-CRIME AGAINST HUMANITY
Team Enigma interview with Lara Logan and Sasha Latypova. The evidence is showing that this whole thing has been a charade. It is performance art to convince the public to roll up their sleeves and accept the Abomination-Shot.

This explains why nothing in this clown-show has made any sense. It’s the greatest War Crime ever committed against the population of the WORLD, and Patriots cannot rest until these sociopaths have been brought to JUSTICE. One way, or the other.

[JB] Has Brought Us To The Brink Of Nuclear War, Trump – WW3 Can Be Avoided Easily – X22 Report

The [DS] is now in the process of removing [JB], he has become a liability and they will continue to pressure him and eventually as the truth and facts come out he will most likely start to lose it, he will then most likely be taken out by the 25th Amendment. Trump sends a message that we are on the brink of a nuclear war and it needs to stop and there is a very simple solution. The peace maker is throwing is hat into the ring to stop WWIII.