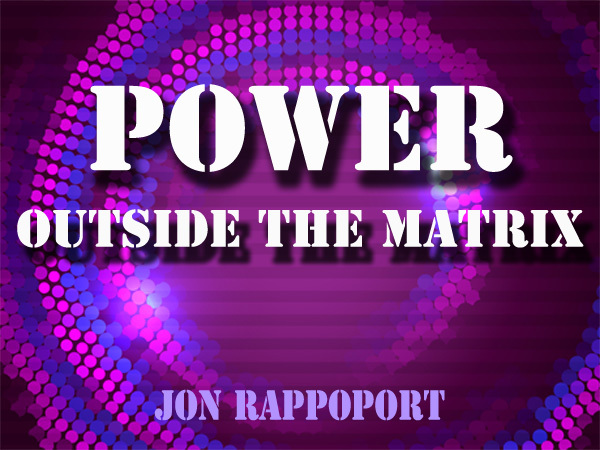 To order my mega-collection Power Outside The Matrix, click here.

Yes, I believe my collection, Power Outside The Matrix can help people who want to become writers or much better writers. I did my best to make it a rocket for writers.

He finds something so explosive it would turn the world on its head.

I’m not talking about a mere riveting scandal or a parochial crime.

This is when the imperative to ATTACK becomes absolutely necessary.

And the big clue is this: attack along multiple vectors, and keep it up.

You can’t go half-way. If you do, the story and the truth will be wiped out, or a lesser version of it will be shoved out front for public consumption—the limited hangout.

If you go half-way, there’s a chance YOU’LL go down with the story.

Either walk away or go all the way.

“But I wrote about it and nothing happened.”

So what? Write about it 16 times. 50 times. Don’t stop. If you don’t see the explosion you’re hoping for, know the truth you’re telling is crawling its way into minds. It’s eating its way in. Other writers are thinking about it, walking around it, picking up on pieces of it and publishing.

You’re a fighter, you’re in the ring, and this will go on for 100 rounds. Or more. Unless you throw in the towel and quit, sitting on your stool in the corner.

This is more than you thought it was. Absolutely. That’s when the thing called DESIRE comes up.

What are you in this for?

The degree of the quickening of your blood and your brain will give you the answer.

And there’s another factor, too. Do you ENJOY overturning Reality itself on a grand scale?

If so, you’re in the right place.

Turn the screws. Don’t just report the astounding facts. Draw up the implications and launch them. Describe all the ripples. Leave no doubt as to how much Reality has just been destroyed.

These implications will come to you as you’re writing. If you’re ready for them. If you’re sniffing for the big, bigger, and biggest picture.

You can’t just be a person with his nose to the wheel. You can’t just record the turning and breaking of the gears. You have to come to see what all this MEANS, and you have to blow the meaning(s) up into one vivid photograph after another for the reader.

Don’t leave it to chance.

This is where you separate yourself from the pack. Because although other writers will agree with you over time, many of them or most of them don’t want to come to grips with the IMPLICATIONS the facts are exposing. They want to build walls around the facts and put facts under microscopes. They want to confine the story. You want to blow it open.

And as you’re seeing, in the wreckage of the vault, the truth of it all swimming into view in successive waves, you’re writing and publishing, and as you realize one fantastic implication after another, you’re laying out each one in its full glowing form.

And no one has to tell you, you have to be a WRITER, too. You see that. You know that. In order to tell the whole story, it’s imperative.

So you ARE a writer. You keep pushing out one piece after another, and you’re up to the task. You find the words. Words come to you.

As you write and read what you’re writing, you’re catapulting yourself higher and you’re drilling yourself deeper into the new world you’re shaping—from the facts.

And there you are, and there it is.

In Power Outside The Matrix, my Writer’s Tutorial — my instructions to writers, aren’t a cage you climb into.

Don’t think about writing as a cage.

You’re outside, not inside.

That should be why you’re a writer.

In my tutorial, I’m not laying down hard and fast rules. I’m not asking for obedience. I give you tools, but you decide how to use them. And you never become a slave to your tools.

If you do opt for slavery, your writing is going to strike the ear in an artificial way. It won’t ring bells. It’ll clang. It’ll come across as trumped-up.

I aim to liberate writers, not pin them down.

Once you feel free and write free, you can shape your work in all sorts of different ways. If you start out trying to shape your work, you’ll stall and dead end.

You’re not aiming to be a trained monkey.

We already have far too many of those.

And let me say something about the craft of writing. You know where you pick that up? From reading other writers. It comes through to you by osmosis. It’s the way a child learns to speak. He listens to people speaking, and he grasps what’s happening.

Faith, self-belief, and determination are wellsprings of a writer. And when faith falters, determination is the key. You’re going to write, no matter what, come hell or high water.

In Power Outside The Matrix, my goal is to transmit the electricity of being a writer. In all my discussions, I come back to that.

Because, you see, being a writer is a LIFE.

It’s not just a career. The career comes out of the life.

Far too many people in this world opt for a career and then try to make a life out of it. That’s normal. That’s standard. That’s a long street that narrows and turns into an alley that ends at a blank wall.

If I loaded you down with tips and tricks and rules, I’d be directing you to that alley. I’d never do that.

Writers give us what we need.

Here are the contents of Power Outside The Matrix:

* Power Outside The Matrix and The Invention of New Reality (6.5-hours)

(All the audio presentations are mp3 files and the books are pdf files. You download the files upon purchase. You’ll receive an email with a link to the entire collection.)

This is about your power. Not as an abstract idea, but as a living core of your being. This is about accessing that power and using it to invent realities without end.

That’s what Power Outside The Matrix is all about.