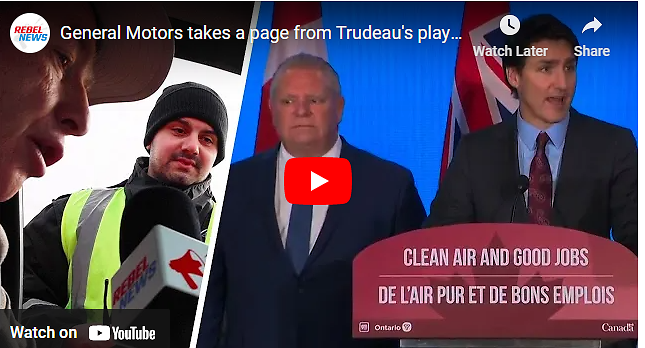 The day before, I received a personal invitation from GM to attend its whiz-bang press conference at its Ingersoll, Ont., plant.

Trudeau was there to announce the launch of a new full-scale electric vehicle factory. During the announcement, he was flanked by his new best friend, Ontario Premier Doug Ford, who stood shoulder to shoulder with him during the press conference.

(Naturally, Trudeau also couldn’t help himself from reminding people to get up to date with their COVID and flu shots.)

My invite came directly from GM’s communication manager Erin Strulovitch (she/her), so I thought we were in the clear.

However, upon my arrival, I was immediately deemed persona non grata, much like the protesters who had gathered outside!

Did someone on Trudeau’s team get cold feet that we might ask him some tough questions?

Here, check out what happened:

We drove two hours with an official invite in hand just to be denied entry. But we weren’t the only ones forbidden from attending this presser.

Turns out that some 200 tradespeople who were retooling the plant were also forced to stay home that day, missing 10 hours of pay. Isn’t that odd?

What could Trudeau possibly have against a few blue-collar workers being present at his event?