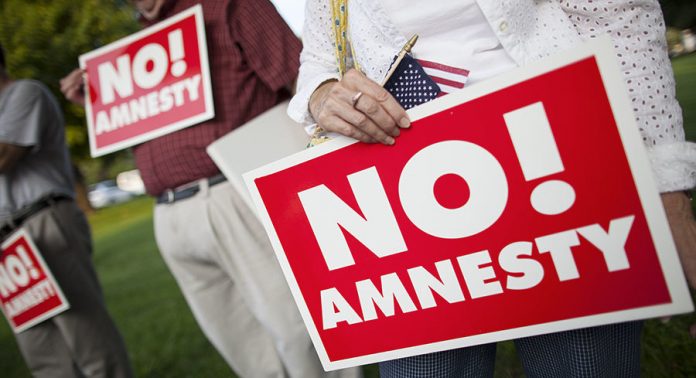 No Amnesty
by Ricky Daytona
November 3, 2022
Unwittingly, on October 31st 2022 Emily Oster, a writer for Atlantic Monthly magazine, opened a festering can of worms and started a war.  A war against those trying to evade justice and responsibility for the harms caused by the past two years of anti-human pandemic psychosis. She wrote an article titled “Let’s declare a pandemic amnesty” and social media and the internet blew up in response. I doubt very much that she expected to act as an agent provocateur, such is the LIberal hive mind always expecting to be righteous and above the criticisms of those deemed to be “below” them. 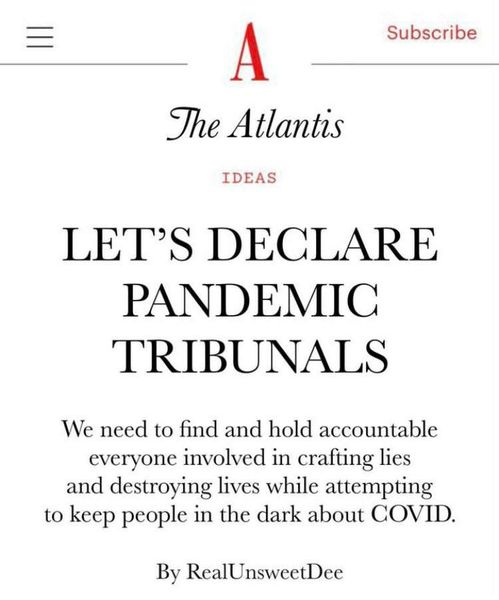 The vitriolic response didn’t just just come from the unvaccinated. Of course the most rigorous response came from those most affected by the dual evils of health apartheid and medical tyranny. But it also came from those who have been lied to. Those who innocently fell for the hoax and are now rising up in anger. It’s still early into the turn around, the war is far from won. But the backlash is starting to build. The EU dialogue about lack of vaccine transmission prevention, and a demand for a further EU Commission investigation is just a start. An open debate in the UK House of Commons about vaccines opened another doorway to start the broader dialogue about these pathetic ineffective toxic injecticides. The extremely low noxious roosterbooster uptake of the new and “just as effective as the old one” bivalent poison shows that the consumer market is dying on its tired, weary, bloodclotteed, stroked out, heart inflamed swollen feet. Parents cannot be convinced to inject their vulnerable children with these damaging serums and too many uncomfortable questions are being asked. In Alberta someone who was denied paramedic treatment because of her inoculation status has opened another rancid festering can of worms. Because AHS currently has no vaccination policy denying such medical service. Fodder for Danielle Smith to run with. So we still need to work hard to hunt down the medical tyrants, the extremists, the health fascists among us who desperately cling to their psychosis, wearing two masks, hiding behind their couches, isolating from humanity, still mindlessly following the hand Satanizer rituals, and privately hating the uninoculated, posting their vile hate on their politically correct safe space social media, and supporting these repulsive Liberal and NDP stooges who propagate fear and social division.
Some of the articles written in response to “Let’s declare a pandemic amnesty” cover the issue better and easier than I can replicate here.
https://www.nationalreview.com/2022/10/a-pandemic-amnesty-hell-no/
https://www.themainewire.com/2022/11/editorial-mainers-should-choose-pandemic-accountability-over-pandemic-amnesty/

You will notice one commonality. These articles are all published by independent small or smaller media and written by independent voices from various geographic locations. Everyday people are speaking everyday language, using platforms that allow them to express the feelings and thoughts of everyday people. Democracy in its purest form. This is a groundswell of turning public opinion. Fear no longer controls the narrative. Mandates are now socially unacceptable and the brutal heavy iron fist of heartless cruel government are now ineffective. Groupthink no longer has the influence it once had. The assimilation is fracturing. Their dark powers are fading and they are getting desperate. 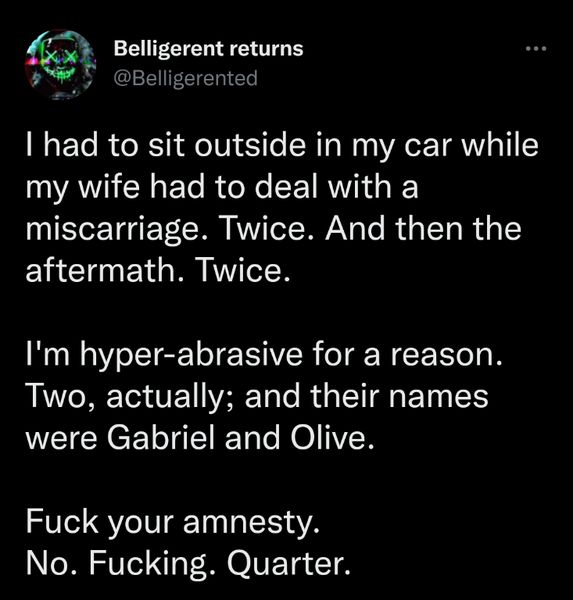 Of course all sorts of authors come out of the woodwork to express their rage and react to her provocation. We don’t know their track record, where they stood in early 2020 as our rights and freedoms were slowly eroded and as we became dehumanized and despised. As the fear virus spread and minds were programmed to hate “the other”. But we must give them the benefit of the doubt and at least appreciate that they have awoken from the dark malevolent spell. Similarly, on her side of the divide, other liberal totalitarian voices have also authored pieces demanding amnesty, and the mainstream media has also picked up on this. Spreading it like a liberal hive mind virus. You can see that they are already backtracking. Covering their tracks. Instead of silently disappearing into the swamp from which they came from. We can smell the fear. They make such grandiose statements, giving the impression of being highly educated and informed. Yet they admit that they were not informed of the real science, and hypnotically fell into the deep trance of the mindless and obedient husk class. They dare to put us into the same category they themselves are in. Those unable to analyse information, incapable of researching. Unable to use independent thought to reach a conclusion.
Of course back in early 2020 we also knew so little and yet we knew so much, because we were open to understanding and learning. Our thirst for knowledge and understanding pushed our inquisitiveness. We forced ourselves to apply hour and after hour to piece together things that were originally over our head. We absorbed information like people studying for a PhD. In fact many of us could have obtained a PhD based on the way we challenged ourselves to learn and absorb information. We researched, studied, and analyzed. We discarded the bizarre and outlandish, we considered the outliers. We waited for new data and science before deciding on various positions. We trusted nothing and considered everything.

And quite incredulously it appears our position was proven correct. Against an army of naysayers, against ridicule, against a massive alignment of media aimed at us. Against friends, employers, family, and others calling us childish names. We proved the “experts” wrong. We waged a war on internet forums and the few social media available to us. We suffered the social media bans, restrictions and the broad shutting down of our voices.

So how does it feel to be on the verge of being victorious? Bittersweet, because we still demand justice and vengeance. The war is still not won. But we found our tribe. The tribe that demands justice, accountability, and vengeance. Accept nothing less. 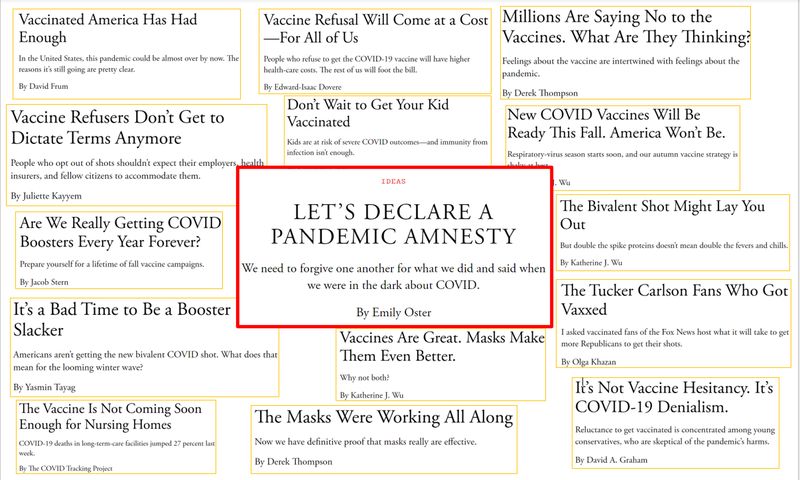 Here’s a link to the original article by Ms. Oster:

You can contact her to express your thoughts at [email protected] and strangely her home page https://emilyoster.net/contact/ complete with a smiling effervescent Emily has gone to static white noise. My own articulations are attached herewith.
And while we’re discussing it, no amnesty either for the dancing psychotic drone-like hypnotized TikTok nurses performing for their masters and mocking us during a so-called “deadly pandemic”.  The psychedelic danse macabre (dance of death).
“The fact remains that dancing nurse’s during a so-called pandemic is one of the most evil things I have ever seen” – Alan Byrne
https://www.youtube.com/watch?v=Itq23n5tHUU

#noamnesty because you, the guilty, don’t get to write the narrative this time. We do. We will judge you, will call the shots, we will buy the piano wire and we will build the gallows. We will form the court of public opinion and if we must, we will be the judge, jury, ushers and hangpersons.
The tribe is rising, and it will be a glorious time.
Ricky Daytona
West Kelowna