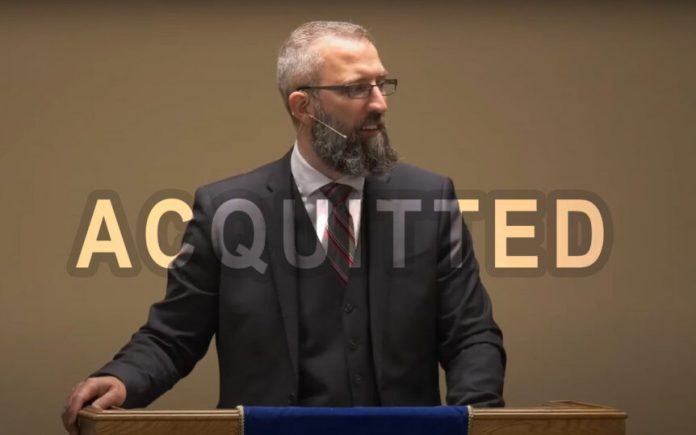 Calgary: The Justice Centre is pleased to announce that the Provincial Court of Alberta has acquitted Pastor Tim Stephens, of Fairview Baptist Church, on alleged charges of violating provincial Public Health Orders regarding physical distancing.

On May 6, 2021, Associate Chief Justice John Rooke of the Alberta Court of Queen’s Bench issued what might be the broadest restraining order in common law history. Justice Rooke’s injunction allowed police to arrest and detain immediately and take before the court any Albertan who exercised her or his Charter freedoms in the face of Alberta Premier Jason Kenney’s unscientific and unconstitutional lockdown orders and restrictions.

On May 13, 2021, at the request of the Justice Centre, the injunction was amended by the Court of Queen’s Bench to apply only to persons associated with the Whistle Stop Café. Nonetheless, on May 16, 2021, Pastor Tim Stephens of Fairview Baptist Church was unlawfully arrested for allegedly violating the terms of the injunction, even though he had no association with the Café and had not been served notice of the injunction. Pastor Stephens was released after spending three days in the Calgary Remand Centre.

Pastor Stephens was again arrested on June 14, 2021, for having allegedly conducted an outdoor church service violating a court order. As a result, he spent an additional 18 days in jail before being released on July 1, 2021. At the time of his release, the Public Health Orders in question had been revoked.