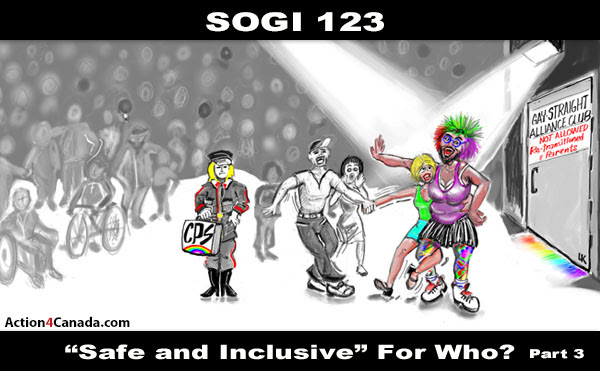 The LGBTQ sexual predators are actively involved in the school systems and ready to pounce on any child who has been indoctrinated by their lies. Secret societies and grooming clubs are set up within the school to quickly embrace a student’s newly acquired dysphoria and provide immediate acceptance, support and inclusion.

Meanwhile, parents are maligned, demonized and said to be a threat to their own child if they do not support this insanity. The state is stepping in and taking charge of minors, fast-tracking them to transition outwardly and medically. Children are being put on harmful puberty blockers and the state is funding the mutilation of their precious bodies. Children are being turned against their parents and parents are finding they have lost the power to protect them.

Please join us to hear the testimony of a young woman who escaped the hands of her oppressors and has joined us on the frontline to expose the evil behind the radical sex activist’s agenda to medically transition children. Sarah was lured into the SOGI 123 web of lies within the public school system, that taught her that she could be a boy, girl, neither or anything in between. At the vulnerable and impressionable young age of 14, Sarah was struggling with her self-worth and her identity as a young woman. Unaware that this is a natural season for many adolescents to go through, Sarah was convinced by the LGBTQ activists who are permitted to have access to children in the school system, that she was struggling with gender dysphoria and that transitioning would be the answer to her depression and feelings of body shame.

After years of being managed and handled by the radical activists (counsellors, teachers, surgeons, psychologists, etc) who participated in fast-tracking her onto drugs for depression, hormone blockers and medical transitioning, Sarah realized with deep regret that she had been deceived. Sarah’s story is one that every Canadian should hear. Read more and share this Empower Hour HERE.