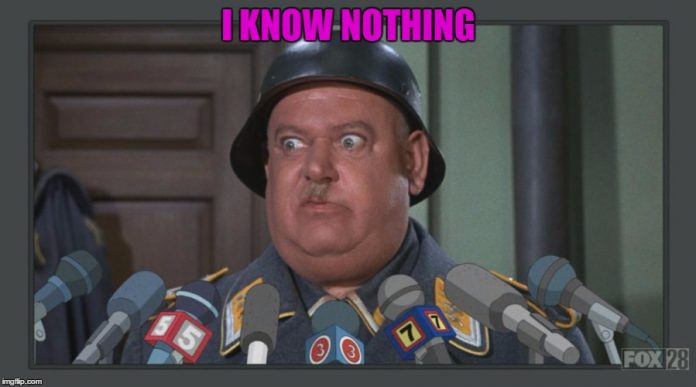 Sargent Schulz is alive and well and living in Germany

I’m dating myself here, but today I am reminded of the old American TV classic Hogan’s Heroes.

In that sitcom, American POWs at a German prisoner of war camp almost single-handed defeated the Nazis with various acts of sabotage. Whenever the hapless German Sargent Schulz found out about such activities, his frantic response was always the same: “I know nussing!”

In my last post, I posited that the US would not be so utterly stupid as to attack the Nordstream pipelines, directly. Rather, they would provide logistic support to the Poles or the Ukrainians to do their dirty work for them.

It appears I may have overestimated the intelligence of the American Government.

James Kunstler talks about the issue today in his blog. He talks about this report by Monkey Werks – an American blogger who tracks American military flight movements:

“MW reports that overnight on the 26th of September, a Navy P8 Poseidon submarine-hunter jet flew out of the US to the Baltic. It did not land in the UK to refuel — thus avoiding any tracking complications — but rather rendezvoused over Grudziadz, Poland, with a US Bart-12 mid-air refueling plane, which it hooked up with for more than an hour. The P8 was equipped with Mk54 air-launched torpedoes. After un-docking from the Bart-12 refueler, the P8 followed a route west along the Nord Stream pipelines, descended to bomb-run altitude, and dropped its weapons. Kaboom. Then, fully refueled, the P8 flew directly back to the USA.”

Here’s what the tracking data shows for the night of September 26th. The blue line is the pipeline, and the green the US Poseidon

I looked at the Monkey Werks site. The site has been around for a couple of years. The guy who runs it is a classic data nerd. He’s fascinated by how much can be learned by following publicly available data on flight tracking. He’s trained a whole slew of followers to help him in this data mining. He seems more interested in sussing out publicly available data hidden in plain site than in grinding any particular axe.

One of his blogs from earlier in the Fall talks about how seriously China’s zero-COVID policy has damaged American supply chains. (There he uses the online data for freighter ship positions to make his argument.)

The attitude he shows to his findings about the Nordstream sabotage is closer to “Holy Shit” than “look at what those evil Americans did.” The guy is an American small businessman who makes ‘beard balm’ and wood sculptures, for Christ’s sake.

The evidence he presents is all public domain. If he was making it all up, I would have to think some of his hundreds of followers would have called him out on it.

I have to presume that if he could track an American Poseidon sub-hunter making a bombing run on the Nordstream pipelines on the night that the sabotage occurred, certainly the German military would also have been able to do so.

Which brings us to the $64,000 question: Did the German military tell their political masters that the Americans had a bomber in the area just when the sabotage occurred? Or did they say: “We must investigate this sabotage thoroughly.” (Lying by omission. Or treason, to be more precise.)

Maybe German Chancellor Olaf Scholz has been told that the Americans were behind the Nordstream sabotage, but Germany is now so utterly dependent on American LNG that he must bite his tongue and remain silent.

Those pipelines were Russia’s greatest leverage to get Europe to drop their sanctions. It is ludicrous to think the Russians would try to destroy their greatest strategic asset in an attempt to try to ‘frame’ the Americans.

After all, Russia watched the US media falsely framing Russia for four years for ‘interfering’ in the 2016 elections. Surely, after that experience, the Russians could figure out that the Western mainstream media would not point the finger at America under any circumstances.

The Russians could easily predict that the US media would try to claim that Russia bombed their own pipelines, even in the absence of any evidence to support that claim, the same way Western media has claimed that the Russians bombed themselves at the Energodar nuclear power plant. No, the Russians are not THAT naive.

Damaging the pipelines was an act of war – an act of war not just against Russia, but also against America’s erstwhile ally, Germany.

Someone committed an act of sabotage which will have very dire consequence for the German people and the German economy this winter. And not just anyone. This operation was clearly beyond what any rogue terrorist organization could have accomplished. An operation this complex had to be done by a state actor. If not the Americans, then who?

Perhaps the Americans knew the other NATO militaries wouldn’t blow the whistle on them. Perhaps they hadn’t reckoned on an army of geeks tracking their movements.

I don’t suppose the US Government is too worried though. The mainstream media of the West will work very hard to ignore this story. “I know nothing” is a very common affliction.