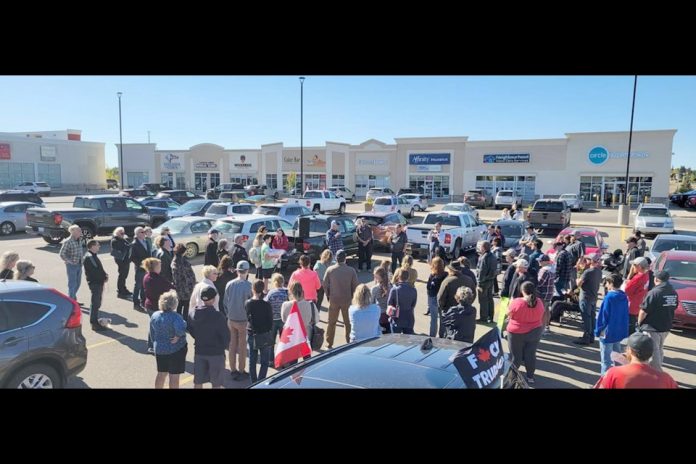 A vigil was held for Carol Pearce’s family on Saturday in Saskatoon. Pearce died seven minutes after receiving the COVID-19 booster shot and her family believes that killed her. Mark Friesen / Facebook

Even though Sask Health says Carol Pearce’s death was from natural causes, MLA Nadine Wilson maintains she died from the COVID-19 booster shot.

SASKATOON – “One death is too many,” said Saskatchewan Rivers MLA Nadine Wilson at a vigil in Saskatoon Saturday for Carol Pearce who died seven minutes after receiving her COVID-19 booster.

Pearce was fully vaccinated and got her booster on Sept. 14 at a Saskatoon drug store. She was waiting the required 15 minutes after the jab when she died.

Her daughter Stephanie Foster believes her mother died from the COVID-19 jab and she isn’t alone. MLA Wilson maintains that was the cause of Pearce’s death, as does Mark Friesen, the official Buffalo Party candidate for Saskatoon-Meewasin.

Wilson and Friesen spoke to the solemn crowd at the vigil where dozens of people attended. The crowd stood near flowers, teddy bears, and notes of condolences that were placed in front of the drug store where Pearce died.