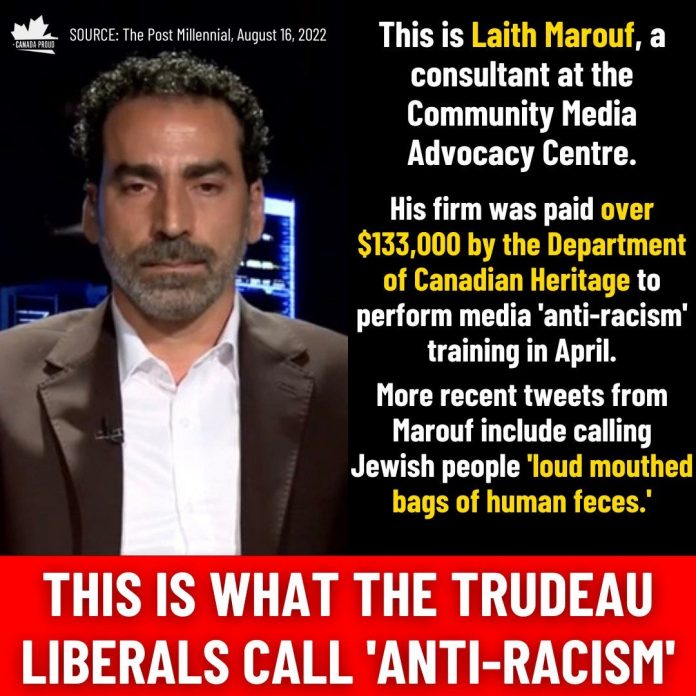 According to the Toronto Sun, Canada’s Liberal government “is investigating an anti-racism consultant they’ve paid over $100,000 dollars.”

Minister of Housing And Diversity Ahmed Hussen has asked the Department of Canadian Heritage to “look closely at the situation.”

Given PM Justin Trudeau’s attitude toward religion in Canada, Hussen will take a look, and return to his personal speciality– advancing 3rd World Immigration, Diversity, Islam, Africa and Multiculturalism in Canada.

One must appreciate the religious “pecking order” established by the Trudeau government. At the top of society’s religious totem pole is Islam, followed closely by Sikhism. Further down the chain, we discover our country’s shunned religious communities. Judaism isn’t exactly a priority, but it comes in above post-modern Canada’s lowlife of religions: Christianity.

So half-Somali citizen Liberal Cabinet Minister Ahmed Hussen gets a tad worked up about vile statements against Jews. Give it time, it will pass. The main order of the business of religion will not change one iota. Like all aspects of Canada’s “Woke Socialist Revolution,” the fundamentals are cast-in-stone.

“Meet Laith Marouf, one of Canada’s most vile anti-semites. The government gave him a $133,000 grant to build an “anti-racism strategy” for Canadian broadcasting. That’s like paying Jack the Ripper to run a women’s shelter. Top officials must take responsibility and resign.”

That and a loonie will get you a cup of Tim Horton’s coffee. Canada’s religious hierarchy is set in concrete. Within a generation, Islam will be our most prominent religion. No politician apart from Justin Trudeau(Hussen being a close second) hold greater responsibility for an inversion of Canada’s religious structure.

“Something is deeply rotten in @CdnHeritage. A drooling anti-semite & Assadist gets a contract to instruct the CRTC in “anti-racism” and nobody notices?” says journalist Terry Glavin.

Canada’s cultural degeneration as advanced by PM Trudeau comes in the form of a perpetual inversion of truth– as exemplified by the Department of Heritage. The closer one looks, the more one comes to realize that this branch of the federal government is dedicated to the decimation of our national heritage.

In terms of anti-racism, it is arguable that the Canadian Anti-Hate Network promote prejudice against an identifiable community: Anglo-European Canadians.

In Trudeau’s “no core identity” Canada, everything is inverted and upside down. In terms of race-relations, our society has degenerated into a jumble of absurdist theatrics. CAP believe the Liberals want it this way. A fractured, chaotic social fabric being the very best thing for our country’s transition to socialist dictatorship.