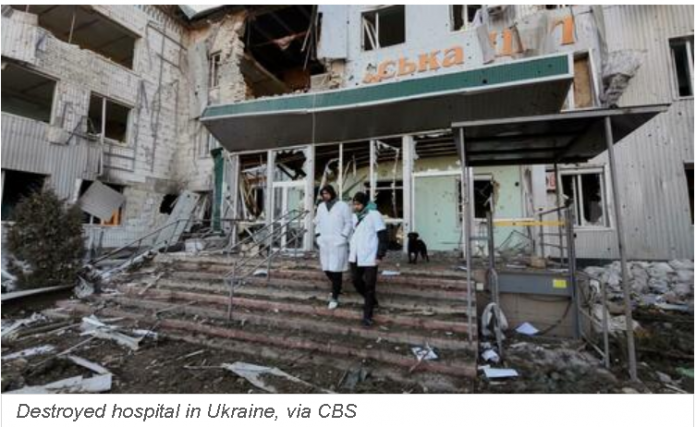 There has been immense pressure to label anyone who says anything even remotely critical of Ukraine’s Government a ‘Putin-lover‘ or a ‘Russian sympathizer.’ (It doesn’t matter if what you’re saying is the unvarnished truth: no-one is allowed to speak ill of Ukraine!)

In these circumstances, it feels important to acknowledge those few voices who are unwilling to be silenced.

Amnesty International is quite accustomed to being attacked for sharing the results of their various investigations. That said, it still must have required courage for Amnesty to release its most recent report on Ukraine.

What Amnesty found was a repeated pattern that was very disturbing. The Ukrainian army had a habit of billeting its soldiers in schools and hospitals. The Ukrainian military would also routinely place their artillery guns in or next to residential buildings, effectively using the people living there as human shields.

Russia has frequently been accused of ‘war crimes’ for firing at schools, hospitals, and apartment buildings that were being used as firing points by the Ukrainian army. Amnesty correctly points out that the war crime here is actually Ukraine’s – for using its own citizens as human shields.

Alina Lipp is a German journalist who has been threatened with a three-year jail term by her own Government for truthfully reporting on Ukrainian army shelling of civilians in downtown Donetsk city in the Donetsk People’s Republic. Most recently the Ukrainian army has been shelling civilian areas with thousands of a particular kind of cluster weapon known as a petal mine.

These innocuous green or brown little mines are meant to be easy to overlook in the grass or on the street, but they are powerful enough to blow off your foot if you accidentally step on one. Curious children frequently end up blinded, disfigured or killed, as are dogs and cats.

These are not a military weapon. They are designed to kill and maim civilians which is why they are a prohibited weapon under international law.

Ukraine’s official stance is that the Donbass is a part of Ukraine, that only a few radicals and Russia wanted the Donbass to be a separate country, and that the Ukrainian army has been trying for seven years to ‘liberate’ the Donbass from ‘Russian occupation’.

Tell me this: If the Ukrainian government actually considered the ordinary people of the Donbass to be ‘oppressed Ukrainians,’ why would they be actively trying to kill them?

We can be reasonably sure the Government of Ukraine will not stop committing such war crimes if the mainstream media in the West are silent about them. Does ‘supporting’ Ukraine include supporting Ukraine to commit war crimes?