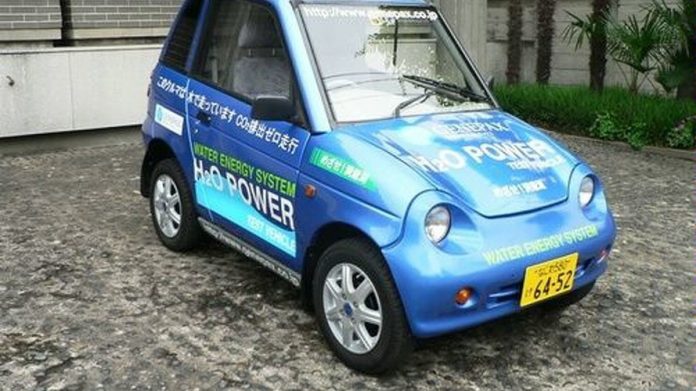 I present answers from various sources

For years, I’ve been writing about the technocrats’ plan to radically lower energy production and use, worldwide.

This program, hidden behind all sorts of propaganda about energy-sharing, environmental justice, and climate change, is a method for visiting destruction on humanity.

Aside from oil, gas, coal, and nuclear, alternatives exist. The technocrats’ preference for solar and wind power—two methods that are presently incapable of replacing traditional energy sources—shouldn’t make people think those are the only options.

Here, I ask the question, can cars run on water?

I present answers from various sources.

Keep this in mind. Many of the naysayers readily admit the technology is available but claim the cost is prohibitive. They neglect to mention the gigantic government subsidies and deals and favors that make nuclear power—and even the oil industry—possible.

These critics will NEVER say, “Well, sure, you can build a nuclear power plant that produces steam, but the cost of doing it is absurdly high and rules it out as a viable source of energy.” But they WILL say it about splitting water into oxygen and hydrogen and running cars on hydrogen.

Popular Mechanics (2008): “There is energy in water. Chemically, it’s locked up in the atomic bonds between the hydrogen and oxygen atoms. When the hydrogen and oxygen combine, whether it’s in a fuel cell, internal combustion engine running on hydrogen, or a jury-rigged pickup truck with an electrolysis cell in the bed, there’s energy left over in the form of heat or electrons. That’s converted to mechanical energy by the pistons and crankshaft or electrical motors to move the vehicle.”

“Problem: It takes exactly the same amount of energy to pry those hydrogen and oxygen atoms apart inside the electrolysis cell as you get back when they recombine inside the fuel cell. The laws of thermodynamics haven’t changed, in spite of any hype you read on some blog or news aggregator. Subtract the losses to heat in the engine and alternator and electrolysis cell, and you’re losing energy, not gaining it–period.”

From thoughtco[dot]com (2019): “Can you make fuel from water that you can use in your car? Yes. Will the conversion increase your fuel efficiency and save you money? Maybe. If you know what you are doing, probably yes.”

MIT School of Engineering (2018): “A water molecule contains three atoms: an oxygen atom and two hydrogen atoms, which bond together like magnets. According to Wai Cheng, a professor of mechanical engineering and director of the Sloan Automotive Lab (where he does research on engine performance and emissions, combustion science, and energy conversion), breaking those bonds will always take more energy than you get back.”

“Let’s say you wanted to build this car. It would need equipment to split a water molecule apart and separate its oxygen and hydrogen. Then it would need to isolate each of them in separate tanks. Then you would need a combustion system that could mix and ignite them, or a fuel cell that could recombine them to make electricity. The released energy could then drive a piston or run a motor and move the car.”

“Here’s the problem, Cheng says: ‘A water molecule is very stable.’ The energy needed to separate the atoms is greater than what you get back — this process actually soaks up energy instead of giving it out.”

“Plus there’s a more volatile problem: hydrogen is dangerously flammable. Without the right safety measures, a fender-bender could turn into an explosion worthy of an Avengers movie.”

Gaia[dot]com (2020): “[Stanley] Meyer’s invention promised a revolution in the automotive industry. It worked through an electric water fuel cell, which divided any kind of water — including salt water — into its fundamental elements of hydrogen and oxygen, by utilizing a process far simpler than the electrolysis method.”

“Despite skepticism about the legitimacy of a car that runs on water, Meyer was able to patent his invention under Section 101 of the Subject Matter Eligibility Index…”

“Meyer’s water-powered engine was the result of 20 years of research and dedication, and he claimed it was capable of converting tap water into enough hydrogen fuel to drive his car from one end of the country to the other. His invention was mind-boggling and promised a future of non-polluting vehicles that could be refueled with a garden hose.”

“On March 21, 1998, Meyer was having lunch at a Cracker Barrel with his brother and two potential Belgian investors. The four clinked their glasses to toast their commitment to uplifting the world, but after taking a sip of his cranberry juice, Meyer clutched his throat, sprang to his feet, and ran outside. Rushing after him, his brother Stephen found him down on his knees, vomiting violently. He quickly muttered his last words, ‘They poisoned me’.”

“Meyer’s death was investigated for three months, though it was eventually written on the coroner’s report that he died of a cerebral aneurysm.”