Message from Tanya Gaw of Action4Canada

Please join Tanya Gaw as she once again welcomes Rocco Galati, top Canadian Constitutional Lawyer, onto the Empower Hour to engage in conversation surrounding Action4Canada’s legal action and other cases filed by the Constitutional Rights Centre.

In Pursuit of Justice

In July of 2020, Tanya, the founder of Action4Canada, spoke with Rocco Galati about retaining him as legal counsel in response to the BC and federal government’s massive “pandemic” fraud that was not only misleading millions of citizens into believing that they were facing a deadly virus, Covid-19, but was also the excuse behind implementing totalitarian and overreaching mandates.

Tanya had been involved in addressing government corruption since 2015, so when the “Covid-19” virus was first reported she knew instantly that this was an orchestrated opportunity for Trudeau to catapult tyranny into Canada. Tanya reached out to several lawyers before contacting Rocco but within the first few minutes of their conversation she was convinced that Rocco was the man to take on this constitutional challenge and agreed to retain him. Rocco was the only lawyer at the time, who was fully aware of the global agenda and because of his experiences as a child growing up under the Mussolini regime, Rocco also fully comprehended the magnitude of the threat facing Canadians.

Rocco was born in 1959 in Calabria, Italy and his family endured much persecution. Rocco’s father was court marshalled and interned for opposing Mussolini, the Italian Prime Minister who founded and led the National Fascist Party. Rocco’s father told him that “fascists don’t come marching in overnight. It’s a slow march.”

As reported by the Toronto Star, Rocco’s mistrust of authority is the backbone of his successful law practice, which only takes on cases against the government. Cases that other lawyers won’t touch. Because of this, Rocco has undergone much scrutiny, surveillance and threats against his life. According to the Star’s report, Rocco claimed for years that CSIS was listening in on his phone calls with clients, and he found out through court documents that they were in fact doing it. He believes they still are.

Rocco states that “The only effective balance to governments going wrong is an independent judiciary and the rule of law.” He believes that, “If the judiciary is not itself following the dictates in the law and constitution, then you’ve got a real problem.” This statement was made in 2013 and his words ring ever true as we experience a complete breakdown of our judicial system, and the infiltration of corrupt and compromised judges nationwide. Many of the courts across Canada have been corrupted but with Rocco’s skill and expertise it is believed that when he has his day in court, justice will prevail.

Rocco has had a very successful 32-year career as a litigator. He has well over 500 cases reported in the jurisprudence, at all level Courts including the Supreme Court of Canada. Twice he was named one of “Canada’s Top 25 Influential Lawyers” by Canadian Lawyer Magazine.

On October 29, 2019 Rocco made the following powerful statement on the steps of the Ontario legislature: “The right to choose does not belong to the state. It belongs to the individual. Only in a police state could you violate a person’s body without their informed knowledge and consent.”

Rocco believes it is his duty not just as a lawyer, but as a citizen, to speak up and take action. He says that “As Canadians we prefer not to engage, and pretend that everything is OK, and it’s not.” He says that he does not seek out controversy. But if no one else will call out the government when it’s wrong, rest assured that Rocco Galati will.

“As my father would have said, I’d rather be controversial than complicit in ignoring the law, in spitting in the face of the Constitution.”

We are so grateful to Rocco for his tenacity in the face of such adversity and together, we look forward to achieving great wins on behalf of every single Canadian in response to this war on humanity.

Be sure to Register in Advance, and share this invitation with others. You won’t want to miss this Empower Hour.

Rocco established The Constitutional Rights Centre as a private corporation whose sole mission and aims are the protection, defence, enforcement, and enhancement of constitutional rights, and the supremacy of the Constitution, and the Rule of Law, without government funding, interference, or influence whatsoever. Learn more about the CRC HERE. 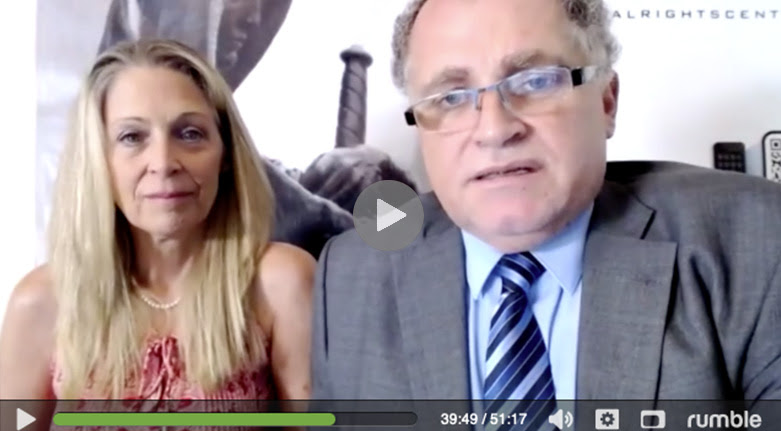 In August of 2021, Tanya and Rocco Galati gave a press conference on the filing of the Statement of Claim in the legal action against the Federal and BC governments. The video has been viewed over 605,000 times, bringing much needed awareness in Canada and around the world, to the government’s illegal activities in trampling over the rights of Canadians. In addition to the legal action, Action4Canada is actively educating and empowering Canadians to put a stop to it. You have the power…just say NO more!

Be sure to view the Action4Canada Legal Action page for updates and further information.

Remember: Freedom of speech, thought, belief and the right to life, liberty and security of the person are guaranteed. We do not need to beg, barter or ask for them…they are ours for the taking.