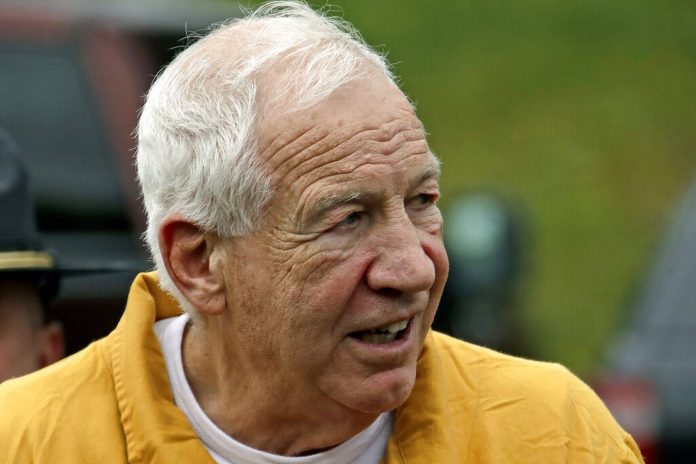 I’m reposting my 2011 piece because the mainstream press is now labeling accusations of pedophilia “a conservative strategy to attack Democrats.”

The Second Mile, on its site, claims it has helped 100,000 children in Pennsylvania. So far, Sandusky is the only accused pedophile.

To understand the reach of Second Mile and its prestige and influence in the state of Pennsylvania, and therefore to see how the current investigation could be narrowed or blocked, it’s instructive to note its supporters. Most of these names have now been removed from the charity’s site, but before that happened they were saved by at least several people. A poster at HawkeyeNation.com has put up many names. I found a few myself on Second Mile pages.

For example, Second Mile holds what it calls Challenge Residential Weeks. They are mini-camps for kids. They’re sponsored by Bank of America, The Hershey Corporation, Walmart, and Warnaco, whose leading brand is Calvin Klein.

Other companies show up peripherally, not directly, through individuals who work for them or did work for them and support or work for Second Mile:

Then there are people who have held honorary status at Second Mile:

* Matt Millen, former NFL player and current ESPN analyst (Millen was an unpaid “director” of an honorary board who possibly had duties at Second Mile)

I found four people who are Penn State employees:

* Susan Rao, who works in a science laboratory

I’m in no way suggesting that any of these people are involved in the current Sandusky investigation or anything else untoward.

But it helps to understand the landscape. The very presence of these important names could result in someone, somewhere deciding it’s better to keep the Sandusky investigation on its single rail, and minimize efforts to find out what else, if anything, has been going on at Second Mile, or at Penn State.

Consider the furor that has been aroused by what has happened so far. The prospect, for law enforcement, for Penn State, for Second Mile, if another or other pedophiles exist is daunting, to say to the least. The repercussions could turn the tremors of an earthquake into a volcano.

In the years leading up to the arrest of accused child molester, Jerry Sandusky, there were not only clues, there were reports. The most stark report came from then-graduate assistant, Mike McQueary, who stated he saw Sandusky raping a young boy in the showers of the Penn State locker room, in 2002.

McQueary told his father, told Joe Paterno, the football coach, who then passed some version of what he was told to his boss—and so on and so forth, all the way up to the president of Penn State.

Where, apparently, nothing was done. The police certainly didn’t take action.

And then for nine years, Sandusky was free to come to Penn State and use the facilities, although he had already been retired from coaching (1999). He was sometimes in the company of children.

No one did anything.

McQueary rose to the position of assistant coach on the football team. He saw Sandusky, between 2002 and 2011, many times on campus. So did head coach Paterno. It is assumed that Paterno’s bosses also knew Sandusky had access to sports facilities at the college.

How to explain all this?

A psychological state of denial? Some sort of frozen indifference? Fear of spoiling the reputation of the college?

Although one or more of those reasons might be relevant, perhaps they’re too easy. Perhaps there is more to this than meets the eye.

Suppose these men were aware that the pedophile activity was far-reaching and involved other men? Suppose that was the real secret. And still is.

Yes, this is speculation. Certainly. But so is every other attempt to explain the apparent unconcern about Sandusky, who was on campus mere days before his arrest last week.

Suppose the prospect of, say, going to the police or the press about Sandusky meant the possibility of pulling back the curtain on other pedophiles, other boys, other connections—something so extensive it could never be lived down. Suppose, for example, other pedophiles were (and are) heavy hitters with more power and money and influence than a mere assistant football coach (Sandusky).

A similar paralysis infected Second Mile. Its attorney, Wendell Courtney, saw a 1998 police report indicating that Sandusky had showered with two boys. Although no charges were filed against Sandusky at the time, Second Mile could have removed him from all activities involving children. That is exactly what the charity did in 2008, when Sandusky informed the board that he was being investigated about yet another incident with a boy.

In 1998, the local police worked a sting on Sandusky. They listened to him him talking on the phone to the mother of one of the boys Sandusky showered with. During the call, Sandusky admitted what he did—but for reasons still not understood, the prosecuting attorney, Gricar, and Child Protective Services dropped the investigation. Why? (Gricar disappeared in 2005 and has never been seen again. He has been declared dead.)

To this point, we have heard nothing about photos or videos Sandusky may have possessed. Certainly, the police have searched his home and office. What did they find?

So far, when the press comments on the intransigence of Penn State and Second Mile officials, the statements are expressions of shock and moral outrage and puzzlement. It’s time to move past that and consider that there may be real explanations here.

Second Mile may be forced to close its doors. Moody’s has indicated that the bond rating of Penn State could suffer from this scandal. All because of the activity of one accused pedophile. Imagine what would happen, in this regard, if there are other pedophiles who are part of Sandusky’s operation.

More reasons to try to limit the investigation to Sandusky.

Does that pedophile case sound like nothing more than “a conservative strategy to attack Democrats?”

Wikipedia: “In 2011, following a two-year grand jury investigation, Sandusky was arrested and charged with 52 counts of sexual abuse of young boys over a 15-year period from 1994 to 2009. He met his molestation victims through The Second Mile [the charity he founded]; they [the children] were participating in the organization. Several of them testified against Sandusky in his sexual abuse trial. Four of the charges were subsequently dropped. On June 22, 2012, Sandusky was found guilty on 45 of the 48 remaining charges. Sandusky was sentenced on October 9, 2012, to 30 to 60 years in prison.”