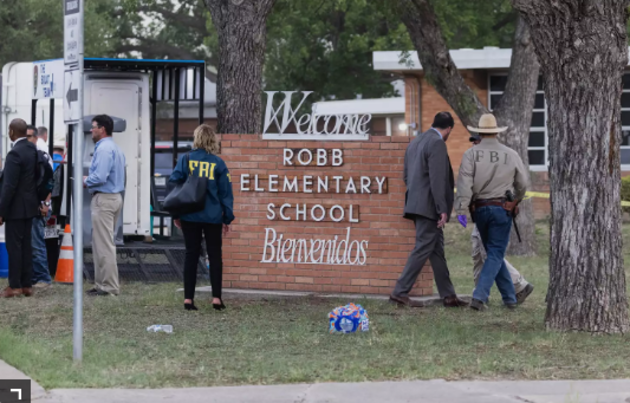 Yes, this is the Texas School District where the recent massacre of students and teachers took place.

Here are excerpts from the Breitbart article on the 48 lockdowns:

“The Uvalde public school district is no stranger to campus lockdowns. In October 2021, Mayor Don McLaughlin reported the district had been forced into lockdowns 48 times during the first few months of the school year, largely due to human smuggler pursuits near campuses.”

“At the time, Uvalde Mayor McLaughlin joined with a commission of local government representatives of Kinney and Uvalde Counties to demand action from the Texas Department of Emergency Management (TDEM) regarding the growing border crisis, Breitbart Texas’ Randy Clark reported. The county and city officials detailed the consequential impact of the border crisis on local resources.”

“The mayor told TDEM officials that Uvalde Consolidated Independent School District officials had to lock down schools ‘48 times this year due to high-speed pursuits and migrants fleeing from law enforcement’.”

“Uvalde Mayor Don McLaughlin told the TDEM the region needs refrigerated facilities to hold deceased migrants. ‘I can’t send local decedents from our community to San Antonio because our facilities are full–that is unacceptable,’ McLaughlin said.”

“McLaughlin told the TDEM his community dispatched all six available ambulances on one occasion to treat migrants in need of care at the local rail yard. That left residents with impaired emergency response capabilities for most of the day. McLaughlin says local schools have been locked down 48 times this year due to high-speed pursuits and migrants fleeing law enforcement in his city.”

“McLaughlin said local law enforcement is dealing with armed smugglers and migrants with convictions including murder and sex offenses. ‘When the Haitian crisis was going on, the border leading to our city was wide open, there appears to be no end in sight, we need help and answers,’ he explained.”

So…very young schoolchildren are locked down almost once a week, because of danger from fleeing illegal immigrants.

Of course, we’re supposed to believe the only problem stems from trying to keep some migrants out of America. If the government simply opened up the southern border ALL THE WAY, took down all fences and checkpoints, and fired every agent in the border patrol, peace and tranquility would prevail.

The huddled masses we’re supposed to accept, without limit, are just yearning to be free. That’s all.

They aren’t tempted to come here because they can acquire welfare and other government perks. Of course not.

They aren’t tempted to come here because the border patrol is ordered to release them pending a future immigration hearing they can avoid.

They aren’t coming here because predatory human smugglers con them into opting for a better life they’ll never experience.

They aren’t coming here because the Democratic Party is making it as easy as possible for these future VOTERS to move up through the southern border.

They aren’t coming here because some of them can commit crimes and, if caught, acquire no-bail release.

They aren’t coming here to game the system.

We’re supposed to believe this massive influx involves ONLY the migrants’ desire to escape harsh and cruel regimes.

That’s the story. The machinery of the federal government is sticking to it and selling it every day.

If, by chance, it happens to put small children under extreme duress and in fear, in schools that have to lock down once a week in Texas, that’s called collateral damage, and it’s incidental.

We should pay no attention to it.

Because we’re generous and kind and opt for the greater good.