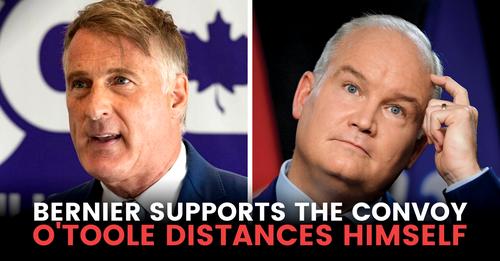 PPC Leader Maxime Bernier is standing with truckers fighting the mandate. Meanwhile, ‘Conservative’ Leader Erin O’Toole refuses to weigh in on the issue, saying it’s not his place to support protesters.

“It’s not for the leader of the opposition or a political party to attend a protest on the hill or a convoy. It’s up to politicians to advocate for solutions in a cost-of-living crisis, in a supply chain crisis in a way that’s responsible and respectful of the public health crisis we’re in,” O’Toole finally said after dodging several other questions about the protest.