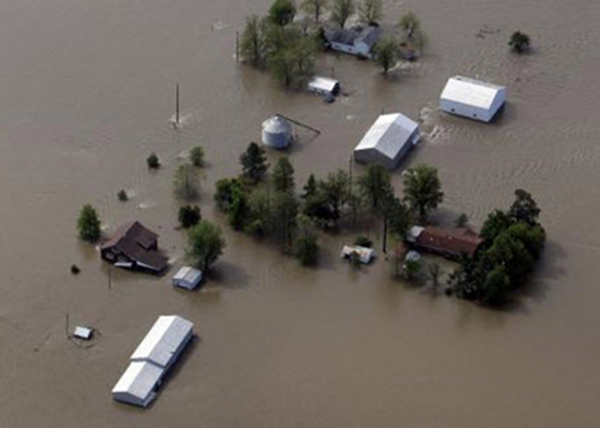 If the flood waters sits around for too long, crops won’t be planted this year.

Huge rivers of water flow above us in Earth’s lower atmosphere. These “atmospheric rivers” are not actually condensed water, but are vapors that really flow. We cannot see them, nor realize they are there when we fly in an airplane through them, but, these vapor rivers are enormous. Their flows rival the actual flow on Earth of the mighty Amazon River. These rivers of vapor are 420 to 480 miles wide and up to 4,800 miles long. Atmospheric rivers are relatively long, narrow regions in the atmosphere – literally rivers in the sky – that transport most of the water vapor outside of the tropics. These columns of vapor move with Earth’s atmosphere, carrying an amount of water vapor roughly equivalent to the average flow of water at the mouth of the Mississippi River. When the atmospheric rivers make landfall, they often release this water vapor in the form of rain or snow.

Scientists discovered that there are five (5) atmospheric rivers in the Northern Hemisphere and five (5) more in the Southern Hemisphere. Each of these 10 rivers carries huge amounts of water vapor.  Although atmospheric rivers come in many shapes and sizes, those that contain the largest amounts of water vapor and the strongest winds can create extreme rainfall and floods, often by stalling over watersheds vulnerable to flooding. These events can disrupt travel, induce mudslides and cause catastrophic damage to life and property.

While atmospheric rivers are responsible for great quantities of rain that can produce flooding, they are essential to the existence of all life on Earth.