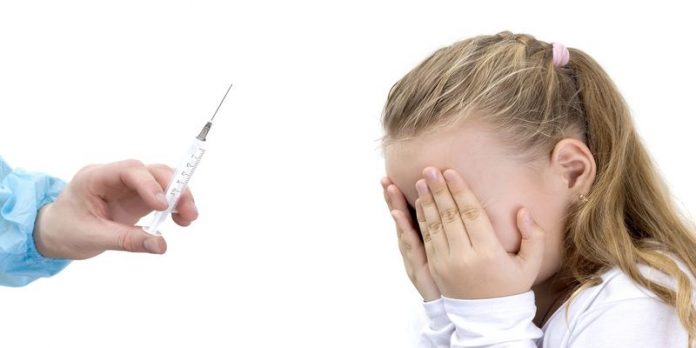 Legacy of big pharma
by Ricky Daytona
West Kelowna
November 1, 2021
How do we know we simply can’t trust the judgement, ethics and morals of anyone involved in big pharma decision making?

“Members include a former vice president of Pfizer Vaccines, a recent Pfizer consultant, a recent Pfizer research grant recipient, a man who mentored a current top Pfizer vaccine executive, a man who runs a center that gives out Pfizer vaccines, the chair of a Pfizer data group, a guy who was proudly photographed taking a Pfizer vaccine, and numerous people who are already on the record supporting Coronavirus vaccines for children. Meanwhile, recent FDA Commissioner Scott Gottlieb is on Pfizer’s board of directors”.

https://nationalfile.com/fda-committee-members-reviewing-pfizer-vaccine-for-children-have-worked-for-pfizer-have-big-pfizer-connections/
We want your lab rats 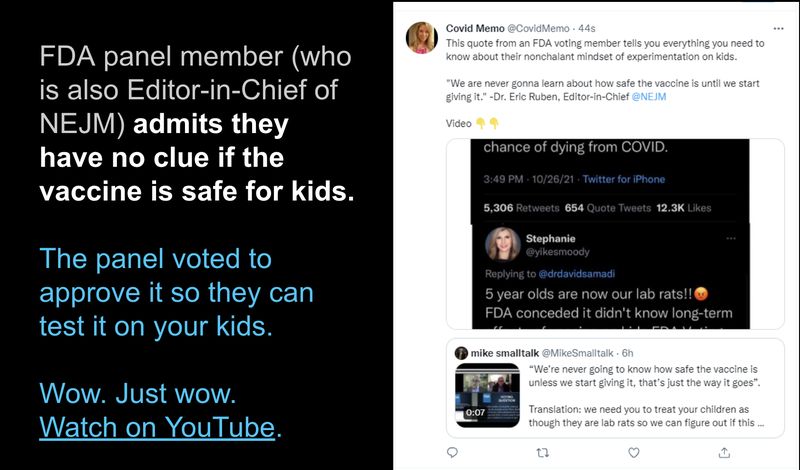 Inconvenient truths
The FDA apparently has no ability or desire to conduct a risk-reward benefit analysis. Even when the work is done for them by advisors, they seem to want to ignore “the science.”
https://docs.google.com/presentation/d/1qJRRFt7PkLTJSv0P-JKWP6YUB4Axa2gtROqpMJ9HkYY/edit#slide=id.geef9d65f14_0_0 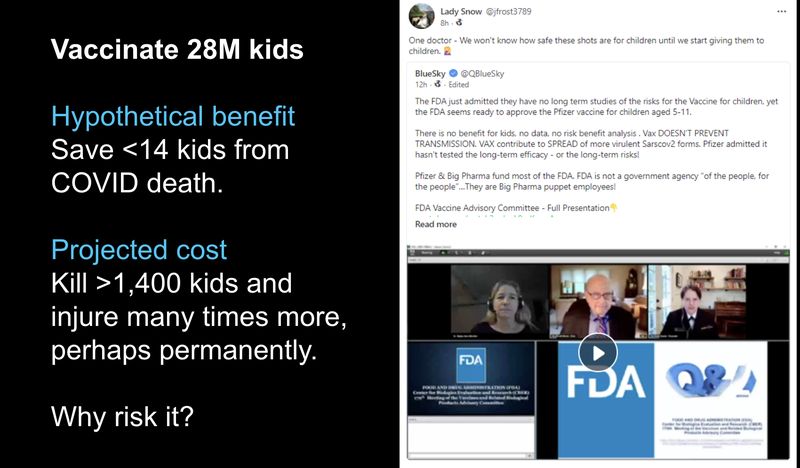 The depopulation agenda
A conspiracy theory, surely? Something from the creative paranoid minds of the tinfoil-hatted?
Back in 1995 a study of tetanus vaccine, strangely only utilizing females within child bearing age. Results included high levels of sterilization.
Since we have no idea what the proprietary ingredients are, as they are redacted from scrutiny, we have no idea what is being introduced into people’s bodies.
“Vaccination for birth control”
“The global population is currently expanding at the unprecedented rate of nearly 1 billion per decade, with 94% of the increase occurring in the developing world. New methods of fertility regulation are urgently needed, and the development of birth control vaccines by active immunization against antigens specific for reproduction has made substantial progress during the last two decades. These vaccines are meant to have an outstanding impact on future control of worldwide population growth by providing safe, effective, long-lasting and reversible contraception. The most advanced of these vaccines are based on the placental pregnancy hormone human chorionic gonadotropin (hCG), and have already entered clinical trials. However, immunological cross-reactivity and lack of efficacy of anti-hCG antibodies seriously challenge this strategy. Conversely, efforts to understand the molecular events involved in the fusion of sperm and egg have led to the identification of new target structures for the development of fertility-regulating vaccines. Herein, we summarize the current state of birth control vaccines and discuss the risks and drawbacks of this approach to fertility regulation”
https://thesearchenterprise.com/article/7580307/Vaccination+for+birth+control+
A good summary of the 1995 program:

“In nature the hCG hormone alerts the women’s body that she is pregnant and causes the release of other hormones to prepare the uterine lining for the implantation of the fertilized egg. The rapid rise in hCG levels after conception makes it an excellent marker for confirmation of pregnancy: when a woman takes a pregnancy test she is not tested for the pregnancy itself, but for the elevated presence of hCG.

However, when introduced into the body coupled with a tetanus toxoid carrier, antibodies will be formed not only against tetanus but also against hCG. In this case the body fails to recognize hCG as a friend and will produce anti-hCG antibodies. These antibodies will attack subsequent pregnancies by killing the hCG which naturally sustains a pregnancy; when a woman has sufficient anti-hCG antibodies in her system, she is rendered incapable of maintaining a pregnancy.”

https://www.ewtn.com/catholicism/library/babykilling-vaccine-is-it-being-stealth-tested-11055
Raising the question “Only women are vaccinated, and only the women between the ages of 15 and 45. (In Nicaragua the age range was 12-49). But aren’t men at least as likely as young women to come into contact with tetanus? And what of the children? Why are they excluded?”
Looking at the historical body of work of big pharma, its legacy of self interest, weak rushed research, ignorance of inconvenient truths, poor testing criteria, willingness to falsify datasets, and focus on profits over health, parents should be very cautious when considering child vaccination.
Buyer beware. 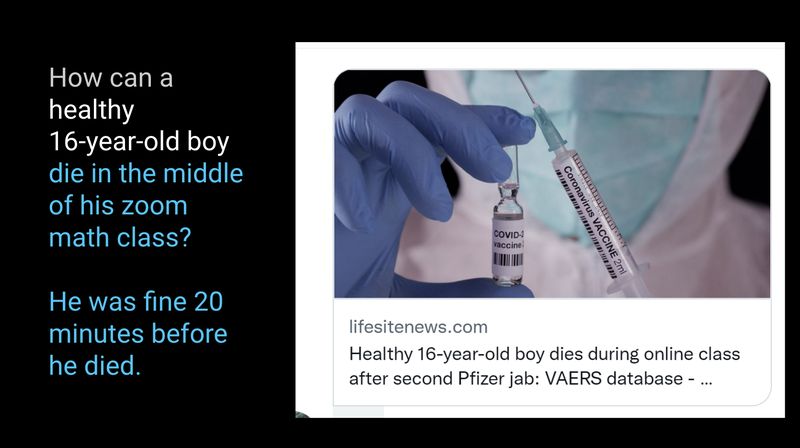 Side deck images taken from https://www.skirsch.io/vaccine-resources/  these are the actual slides presented to the FDA by Steve Kirsch on 26th October 2021, Steve is a member of the advisory panel and is Executive Director of the COVID-19 Early Treatment Fund https://www.treatearly.org/
Further FDA advisory slides available here: https://docs.google.com/presentation/d/1m10LArf525tCPP2tz4-3OIDjEF99W8YKFTtkV_QEu4k/edit#slide=id.geef9d65f14_0_0
Ricky Daytona,
West Kelowna