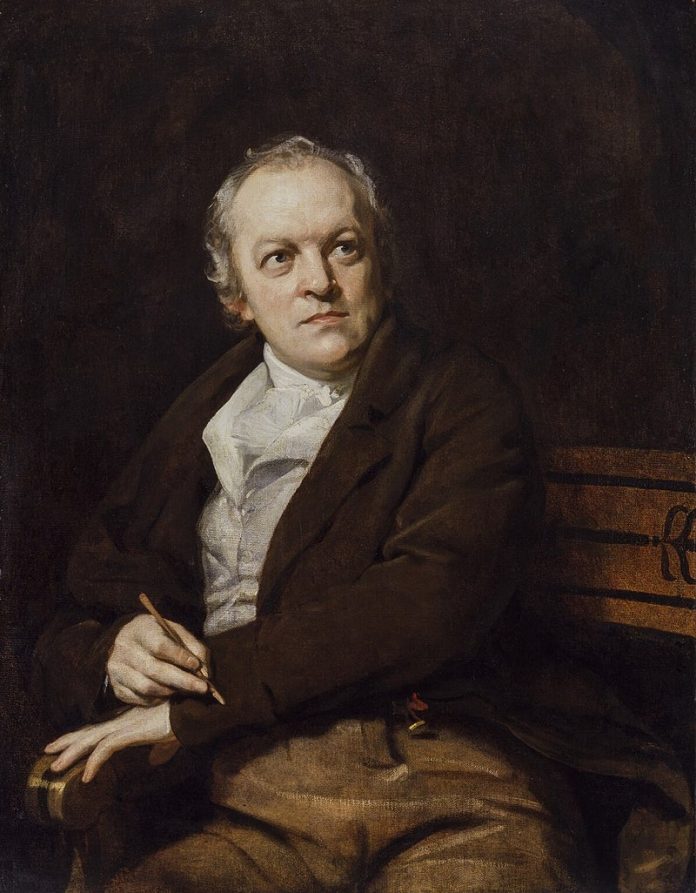 “If the doors of perception were cleansed, everything would appear to man as it is: infinite.”

Since I’ve been writing about the individual inventing his own reality, and having posted a piece about Ayn Rand, I now turn to a quite different person of a different time, the poet and artist William Blake (1757-1827). No doubt Blake would take vigorous issue with my simple claim that he created his own reality; nevertheless…

Aside from the fact that Blake mercilessly criticized organized religion, there is no other poet in the English language possessed of greater faith; the form of that faith, and whether it changed substantially over the years are subjects for scholars. I view Blake, first and foremost, as a poet, who set down what he saw, envisioned, imagined, believed, and questioned.

Here is a question (was it rhetorical?) he raised in one of the greatest poems in any language:

Tyger Tyger, burning bright,
In the forests of the night;
What immortal hand or eye,
Could frame thy fearful symmetry?

In what distant deeps or skies.
Burnt the fire of thine eyes?
On what wings dare he aspire?
What the hand, dare seize the fire?

And what shoulder, & what art,
Could twist the sinews of thy heart?
And when thy heart began to beat,
What dread hand? & what dread feet?

What the hammer? what the chain,
In what furnace was thy brain?
What the anvil? what dread grasp,
Dare its deadly terrors clasp!

When the stars threw down their spears
And water’d heaven with their tears:
Did he smile his work to see?
Did he who made the Lamb make thee?

Tyger Tyger burning bright,
In the forests of the night:
What immortal hand or eye,
Dare frame thy fearful symmetry?

Blake also wrote: “And now let me finish with assuring you that, Tho I have been very unhappy, I am so no longer. I am again. Emerged into the light of day; I still & shall to Eternity Embrace Christianity and Adore him who is the Express image of God; but I have travel’d thro’ Perils & Darkness not unlike a Champion. I have Conquer’d, and shall still Go on Conquering. Nothing can withstand the fury of my Course among the Stars of God & in the Abysses of the Accuser. My Enthusiasm is still what it was, only Enlarged and conform’d.”

And he wrote this: “The ancient poets animated all objects with Gods or Geniuses, calling them by the names and adorning them with the properties of woods, rivers, mountains, lakes, cities, nations, and whatever their enlarged & numerous senses could perceive. And particularly they studied the genius of each city & country, placing it under its mental deity; Till a system was formed, which some took advantage of, & enslav’d the vulgar by attempting to realize or abstract the mental deities from their objects: thus began priesthood; Choosing forms of worship from poetic tales. And at length they pronounc’d that the Gods had order’d such things. Thus men forgot that all deities reside in the human breast.”

And this: “It is not because Angels are Holier than Men or Devils that makes them Angels but because they do not Expect Holiness from one another but from God only.”

“Thinking as I do that the Creator of this World is a very Cruel Being & being a Worshipper of Christ, I cannot help saying: ‘the Son, O how unlike the Father!’ First God Almighty comes with a Thump on the Head. Then Jesus Christ comes with a balm to heal it.”

Make of that powerful brew what you will; I just keep reading Blake’s lines of poetry:

To see a World in a Grain of Sand
And a Heaven in a Wild Flower,
Hold Infinity in the palm of your hand
And Eternity in an hour.

He who doubts from what he sees
Will ne’er believe, do what you please.
If the sun and moon should doubt
They’d immediately go out.

Love to faults is always blind,
Always is to joys inclined,
Lawless, winged, and unconfined,
And breaks all chains from every mind.

Love seeketh not itself to please,
Nor for itself hath any care,
But for another gives its ease,
And builds a heaven in hell’s despair.

O Rose thou art sick.
The invisible worm,
That flies in the night
In the howling storm:
Has found out thy bed
Of crimson joy:
And his dark secret love
Does thy life destroy.

In every cry of every Man,
In every Infant’s cry of fear,
In every voice, in every ban,
The mind-forg’d manacles I hear.

Blake went to school only until he was ten. He was then educated at home by his mother.

His religious faith was equaled by his faith in imagination. Perhaps to him they were the same.

There is no other voice like his in the history of poetry. It is unique, in part, because he never wavered from his own vision. He took jobs and commissions, but they never distracted him from the ocean of his work.

He had “a genius of the ear.” He could hear a nursery rhyme and then raise it to the door of his heaven without ever dropping back into a trace of syrup or sentimentality.

A hundred years later, Yeats read Blake’s most magic lines and realized that modern poems could be filled with them. Magic? Here is what I mean:

Yeats: somewhere in sands of the desert
A shape with lion body and the head of a man,
A gaze blank and pitiless as the sun,
Is moving its slow thighs, while all about it
Reel shadows of the indignant desert birds.

Blake: What immortal hand or eye could frame thy fearful symmetry?

Yeats: Once out of nature I shall never take
My bodily form from any natural thing,
But such a form as Grecian goldsmiths make
Of hammered gold and gold enamelling
To keep a drowsy Emperor awake;
Or set upon a golden bough to sing
To lords and ladies of Byzantium
Of what is past, or passing, or to come.

Blake: When the stars threw down their spears
And water’d heaven with their tears:
Did he smile his work to see?
Did he who made the Lamb make thee?

I mention Yeats for another reason. There is a story told about his marriage. There are several versions. The one I prefer illustrates what I mean when I say: no one can predict what reality an individual will create when left to his own devices, when freed from the restraints of what he is supposed to believe. The story also illustrates the lengths to which individuals will go to forge a unique vision.

For almost 30 years, Yeats pursued the love of his life, Maud Gonne. She refused to marry him. A year after she turned him down for the last time, in 1916, grief-stricken and at the end of his rope, at age 52, he married Georgie Hyde-Lees, who was 25.

Almost immediately, Georgie saw their marriage was doomed to fail. Four days after their wedding, she suddenly told Yeats she could perform automatic writing. “Instructors” dictated highly esoteric texts to her. This intrigued Yeats. Together, they began to work out myriad systems to make metaphysical sense of the huge cascades of strange pages Georgie began setting down—-eventually resulting in the 1925 book, A Vision.

Their marriage endured. They had two children. Yeats dug deeply into the automatic texts and extracted images and phrases which he used and reworked in his late poems.

In my preferred version of this story, Georgie, desperate to hold on to her husband, invented both the pretext of her ability to perform automatic writing AND invented the ensuing mystical texts.

It worked. Once the new alliance with her husband was formed, the marriage survived; and Yeats, his writing up against a brick wall of exhaustion, suddenly found new sources and material and inspiration.

Georgie decided to risk everything, and she won.

On the wings of THE INVENTION OF REALITY.