Despite an estimated 125,000 plaintiffs who have sued Monsanto/Bayer for their glyphosate-based herbicide products’( GBH’s) connection to non-Hodgkin’s Lymphoma, and 40 countries around the world banning or restricting the use of glyphosate, Bayer continues to push the increased use of this agrochemical on food and feed crops.

Canada’s Pest Management Regulatory Agency (PMRA) has recently posted a proposed increase of glyphosate maximum residue levels (MRLs) on food crops to be 100 – 650% higher than previous levels. Glyphosate-based herbicides are used on many crops as a drying agent before harvest, weedkiller in agriculture or landscaping leads to glyphosate contamination of our water, food, beverages, rain, air, and even some childhood vaccines.

The risk of higher glyphosate residues on the global food supply and products, including America’s, resulting in decreased health, is not probable if this proposal is approved. It is definite. Much of Canada and the northern midwest of America are considered the “breadbasket” of America.  In 2018/19, Canada’s total cereal (grain) exports amounted to around 28.39 million metric tons, exported to 95 different countries worldwide. 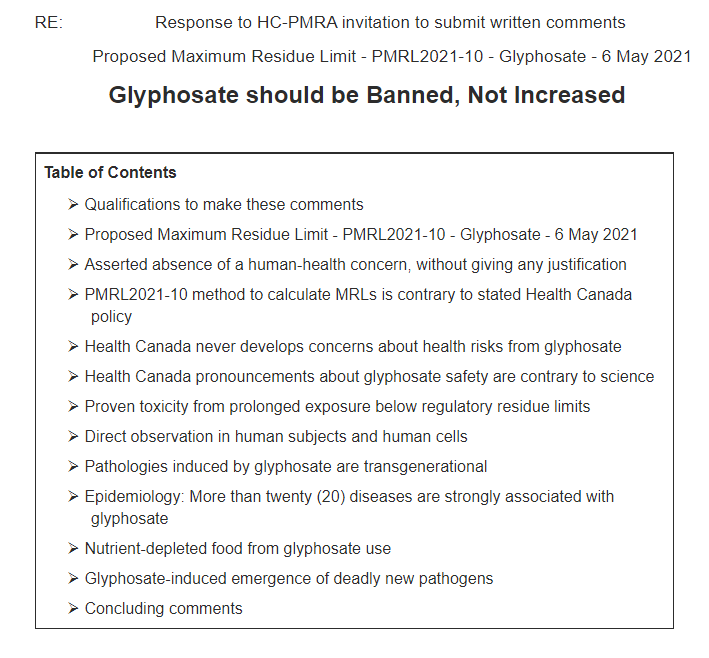