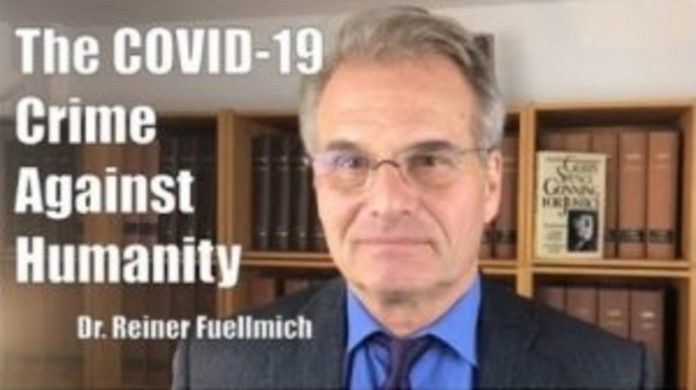 A class action, or representative action, is a lawsuit in which a large group of people collectively bring a claim to court, or in which a certain class of defendants is sued

Reiner Fuellmich  is getting that support from the thousands of lawyers worldwide to bring the Covid19 scandal set up in Davos to the tribunal.

Reiner Fuellmich is the lawyer who succeeded in co-convicting the car giant Volkswagen because of its modified catalytic converters.

And it is the same lawyer who succeeded in condemning Deutsche Bank as a criminal enterprise.

Deutsche Bank agreed to pay more than $130 million to resolve/buy off the case because of foreign corruption practices and fraud cases.

So now he faces his next job. The job of a lifetime, supported by thousands of lawyers and experts worldwide.

According to Reiner Fuellmich, all the frauds committed by German companies are nothing compared to the damage this Covid-19 scam has caused and continues to cause.

This Covid-19 crisis should be renamed the “Covid-19 scandal” and all those responsible should be prosecuted for civil damages resulting from manipulation and falsified testing protocols.

Therefore, an international network of corporate lawyers will litigate the biggest tort case of all time namely The Covid-19 fraud scandal which has since become the biggest crime against humanity ever.

On the initiative of a group of German lawyers, a Covid-19 commission of inquiry was set up with the aim of bringing collective action on an international level on the basis of Anglo-Saxon law.

The hearings of, among others, hundreds of scientists, doctors, economists and lawyers of international repute conducted since October 7, 2020 by the Berlin Commission of Inquiry into the Covid-19 affair have now demonstrated with a probability approaching 100% certainty that the Covid-19 scandal was never a health issue – Dr. Fuëlmich on February 15, 2020

Court sessions can be found here

“Rather, it was a matter of strengthening power, illegally obtained by criminal methods of the corrupt ‘Davos clique’, by transferring the wealth of the people to the members of Davos on the backs of small, and especially medium-sized businesses, among others.”

The committee’s conclusion is that Covid-19 is being used as a diversionary tactic by business and political “elites” with the goal of shifting market shares and wealth from small and medium-sized businesses to global platforms such as Amazon, Google, Uber, and other big tech and multinational corporations.

Platforms such as Amazon, Google, Uber, and other bigtech have thus appropriated their market shares and their wealth

“We have seen what has been confirmed time and time again: the dangerousness of the virus is about the same as that of seasonal flu, regardless of whether it is a new virus or whether we are simply dealing with an influenza renamed Covid-19 pandemic.”