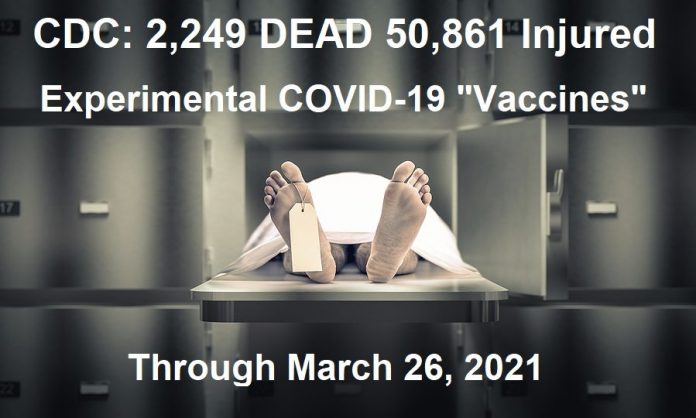 The data in VAERS now goes through March 26, 2021, and records 50,861 adverse events, including 2,249 deaths following injections of the experimental COVID “vaccines.”

Besides the recorded 2,249 deaths, there were 8,287 visits to Emergency Room doctors, 911 permanent disabilities, and 4,824 hospitalizations.

However, the most up-to-date number of deaths following COVID-19 emergency use authorized injections was reported earlier this week on March 30th on the CDC website which stated 2,509 deaths have been reported through March 29, 2021 following experimental COVID-19 injections.

So in just a little over 3 months since the FDA gave emergency use authorization (EUA) for experimental COVID-19 injections to be tested on the American population, as many deaths have been recorded following those experimental injections as deaths recorded to VAERS following FDA approved vaccines for the period starting January 1, 2010 and ending December 31, 2020, a period of 11 years spanning an entire decade.

And yet, the CDC remains adamant that not a single death recorded after an experimental COVID-19 “vaccine” had anything to do with those “vaccines.”

A review of available clinical information including death certificates, autopsy, and medical records revealed no evidence that vaccination contributed to patient deaths. (Emphasis theirs – Source.)

How in the world can anyone continue to take the CDC seriously?

In 2020 $TRILLIONS were handed over to Big Pharma to fight the “pandemic,” and since hospitals received major financial reimbursements for treating people who died due to COVID-19, almost every single death recorded in 2020 was attributed to COVID-19 to collect all these federal funds.

Deaths due to influenza all but disappeared, as did influenza cases.

Now during the first quarter of 2021, the pharmaceutical companies manufacturing experimental COVID-19 “vaccines” are on pace to earn $BILLIONS from these “vaccines,” even before the FDA approves them.

And they have already received $TRILLIONS from the federal government, mainly funneled through the CDC who also holds patents on vaccines, just to manufacture these experimental vaccines, even if they are never approved.

So with so much invested in these “vaccines,” there cannot possibly be any deaths associated with them, as that would shake public confidence and ruin future sales.

This is a perfectly executed plan that has been in the works for almost 20 years, as it has been the dream of Big Pharma to manufacture mRNA vaccines, which have never before been approved and used on humans, and they have been in development since the early 2000s with AIDS and HIV research, headed by the same group of people that today are producing the COVID-19 RNA-based “vaccines,” such as Bill Gates and Anthony Fauci.

The only thing that allowed them to get these vaccines out into the public and test them, was a “pandemic” so that the FDA could issue EUAs without even approving them.

This is first and foremost a business marketing plan for Big Pharma, whose profits were dwindling in recent years due to patents running out on past “block buster” drugs, and when you look at the people at the top of this research and development, such as Bill Gates, they are eugenicists who have no problem with reducing the world’s population, beginning with senior citizens, which is exactly what we are witnessing today.

How long will the world continue going along with this plan before they wake up, perhaps too late for many, to realize that Big Pharma is in the business of selling treatments and drugs to manage diseases, and not actually curing people, because that is a terrible business model when you eliminate your repeat customers by curing them?