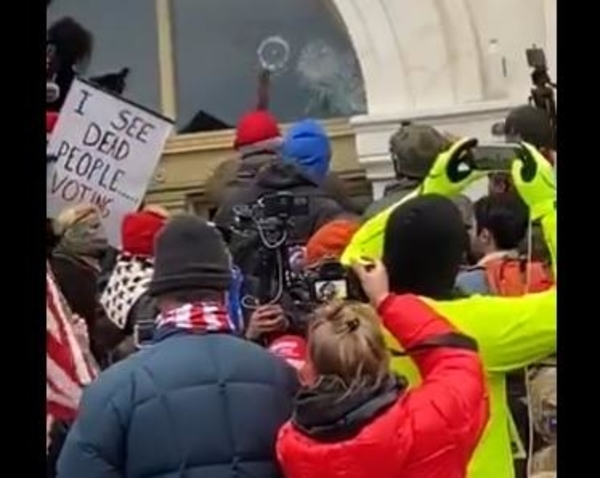 (Moment that Trump supporters tackle man trying to break window into the Capitol, from video on Twitter)

During the meeting at the Capitol to certify the Electoral College votes, several hundred  swarmed the steps of the Capitol. Some of them obtained entrance to the building and posed for publicity photos. The vast majority of the demonstrators were peaceful as expected but a handful had a mission of violence and destruction of property. It is not yet known who these destroyers were but, because they were among those who carried Trump signs and banners, it was easy for the media to call them Trump supporters. No one questioned the obvious, which was that they might have been agents of Trump’s enemies carrying out a mission to throw public opinion against the President at this critical moment. Predictably, Trump supporters now are being labeled as terrorists. Meanwhile, Republicans used the chaos as an excuse to drop the electoral challenge. This event closely follows the pattern of a color revolution carried out in many nations around the world in the past few decades, led and financed by George Soros and the US Deep State. This time, it is happening in the US.

Vice President Pence certified the Electoral votes at 3:40 am. Later, President Trump announced that there will be a peaceful transition of power on January 20th. -GEG