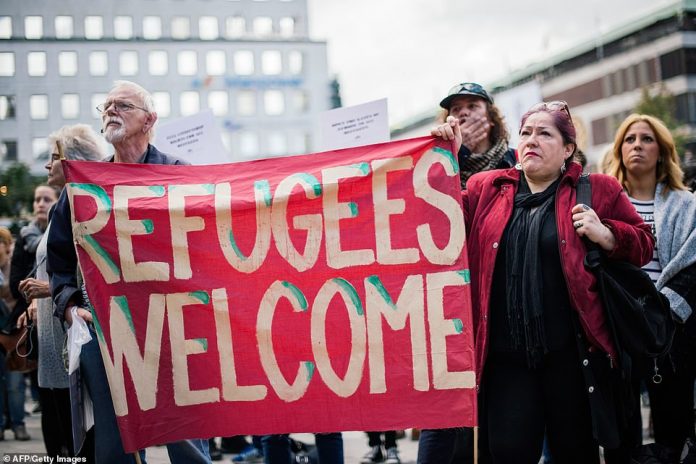 Should we be surprised ?

It is not only Sweden that is experiencing the Horrific increase in Crime in general but also Violent Crime which includes torture, rape, extortion, drugs, racism, religious persecution and so much more, the exact same things are going on in almost ALL EU Nations that opened their Borders without any thought as to who entered/enters their countries .

It really matters not where Immigration/Migrations originates or comes from
but people that immigrate to any country should respect the customs and laws
of that country, my parents did that when they entered Canada and the U.S.
and all new comes should do exactly the same no matter where they arrive from .

Even just as important, immigrants from any country should understand that
when they take up residence in any country they must recognize and accept that their religion does not take precedence over their adopted countries “Rule of Law”, why would one think any thing different ?

None of this is about racism or xenophobia, laws and laws and no matter who
breaks the law by committing rape, robbery, fire bombings, fires, destruction of commercial/industrial/personal property it is a crime and anyone who commits a serious crime that does not hold citizenship of that country should be jailed and once they serve out their term they should be deported . Why should it be any other way ?

They arrive in the U.S.

We must also keep in mind that a very high percentage of violent crime is carried out against the immigrant population after they arrive in the EU, the U.S., Canada or any other nation, the very people that by violent criminals from their home countries, how sickening is that ? The forementioned happens every day when MS – 13 commits violent crime on
thousands of vulnerable people that have moved into the U.S. from South and
Central America .

Much the same takes place in the EU where migrants are victimized and harassed and brutalized by Sharia Police who they themselves entered The EU illegally or as refugees . So now those Sharia Police are doing everything they can to ensure that Muslim Migrants and Refugees Bow to their Demands and brutal religious intolerance . To make things worse Law Enforcement of any given EU nation either do not care or they are afraid To confront the violent Sharia Police so the violent attacks become a daily
occurrence .

Leaders like Merkel, then UK PM Cameron, Hollande, Sarkozy, Juncker, Tusk,
and others not mentioned are all by themselves responsible for the collapse of the EU Union, the economies, cultures, rule of law and so many other traditions held dear by
the European People .

There is NO turning back the EU is in mid-collapse and thee will be no
recovery . The many bad decisions made by EU Leadership Is the only and main reason that the UK voted “BREXIT” and even after that the Liberal Leftist Politicians wanted a “Do Over” which did not go the way they hoped and wished . Once again the Good People of the UK rejected the EU by voting BOJO and Conservative .

It is now up to Boris Johnston and his Conservative Party to make a clean break from the EU and it is time to sand up against the attempted Bullying of Merkel and her “Hench People Kind” !!

The people of the UK and most people in the EU want control of migration/immigration and they want defined borders and they want the rest of the EU Leadership .

Merkel would never say this out loud but the structure of the EU is exactly what she and the rest of Germany has wanted for 70 years, the EU has virtually given Merkel and Germany control of all of the EU, exactly what the Hitler War Machine wished for and tried for 70 hears ago . The Big difference is this time the Germans and Merkel did not need to fire a shot, hell, they did not even need to invade another country because the borderless EU took care of that for Germany .

It is time all citizens of any given country stood up and told their Political Leaders they have had enough, they will no longer tolerate violent Crime, fire bombings, ANTIFA violence, the now radical BLM who have morphed into a terrorist organization, destruction of business, tearing down of statues, attacks on those they do not agree with and the in general terrorist activities that can be attributed to the groups just mentioned and other similar groups that want everything you have worked hard for .

Media and the Entertainment Elite demand that you go out to vote, they are correct, whether it be Federal, State, Provincial, of Municipal, let’s go out and vote for what we believe in and let’s show the Bastards what we are made of !!