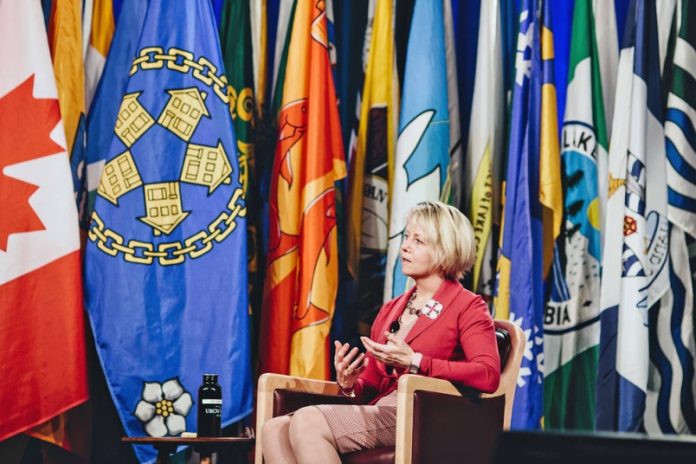 (“You get more by bringing people along and helping them do things, than we do by enforcement.” – @DrBonnieHenry #UBCM2020. Via Twitter)

Provincial health officer Dr. Bonnie Henry divulged a few details Tuesday about the downside of rocketing to household-name status as the face of B.C.’s pandemic response.

Those details were appalling.

She said it’s “been very positive in many ways, but also very negative.” All politicians and high-profile people become targets, she recognized. But “I believe it’s targeted in ways that at least I am unable to understand. …

“There are many people who don’t like what I do, or don’t like the way I see it, or don’t like my shoes. … People feel quite able to send me nasty notes, to leave phone calls to harass my office staff. I’ve had to have security in my house, I’ve had death threats.”

She was appearing on a panel about “reimagining leadership in the pandemic” with two other prominent women — Lt.-Gov. Janet Austin and former Tsawwassen First Nation chief Kim Baird. They were at an online Union of B.C. Municipalities convention.

“How do we deal with that?” Henry asked generally. In the context of an all-women panel, the “we” referred to women, because a lot of that kind of garbage behaviour is gender-based.

“I think people find it’s okay to do that for a woman who’s up front, more so than some of our male leaders, but I could be wrong,” Henry said.