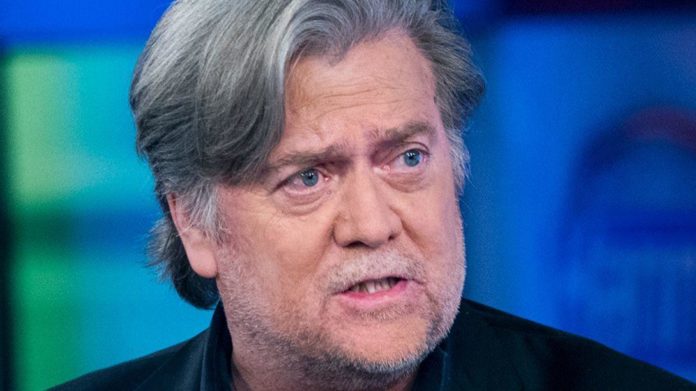 Please let me begin by stating that I support and agree with a lot of what Steve Bannon believes in, even though like far too many, His ego and sense of self importance can cause him trouble and in fact cost him support to the point of where he can lose Credibility. That again is far too common a trait in so called “People Kind of Action” . I have attached the below National Post Review Analysis of the Bannon situation and his connection with the “Build the Wall” Foundation, I believe it will bring some clarity to The situation . Please keep in mind that the D.A. who brings the charges forward absolutely hates and detests Bannon, people like him who have/had any connection with the “Bad Orange Man” so all Republicans in the SDONY are in threat of prosecution .

We must also keep in mind that the “Bad Orange Man”/POTUS fired Bannon and said he likes much of what Bannon represents but does not trust him . Did Trump see something he did not like or was it just two huge egos clashing, who knows . Trump did criticize Bannon a lot but Bannon did sand firm and say he still supported the Trump Policies, was he attempting to get back in the Inner Circle or was Bannon simply attempting to ride on the “Coat Tails” of Trump to curry favour with those in power ?

I believe I am 100% convinced that the DA of and media like CKNW, Global, CBC, BBC, CBS, NBC, MSNBC, CNN, Morning Joe, Rachel, Anderson, Don Le Mon, Jake, the L.A. Times. SFO Chronicle, NYT, WaPo, and the rest of the George Soros, China, Democratic/Liberal media outlets will do their best to make Bannon and his group look like Dracula and his Gang, let’s hope Bannon and his Cohorts are not guilty as charged, if they are I can only recommend one thing, “Hang em High” abuse of public funds needs to stop . “Hello Bill, Hello Hill” .

Of course we do not know for sure what Steve Bannon and his associates were/are up to at this point but let’s face it, the Clintons and many more have similar foundations and in one way or another they all somehow manage to travel by private jet, stay in five star hotels, dine in five star restaurants and hang out with despicable characters which includes Jeffrey Epstein, “WE” types, and two of the Biggest Cons one could ever think of  the Kielburger Brothers, oh yes and that long list includes the very much “Disgraced” former Canadian Finance Minster Flimflam Man and Pick Pocket Bill Morneau (there is nothing worse than a wealthy individual like Morneau who manages to get his Snout Far Too Deep in the Public Trough .

Then of course in Canada that list of Capet Baggers is topped off by none other than “Top Mensa Member and Public Speaking Genius’ Prime Minister Justin Trudeau . Then of course we must not forget the Daughter of Hill and Bill, dear Chelsea who lives no different than the poor old Queen Elizabeth while she runs the Clinton Foundation, WTF does she know ? What qualifies her to Fund a foundation like the Clinton Foundation other than the fact that she is a Clinton . Chelsea Clinton being qualified to run the Clinton Foundation is just about as ridiculous as the poor confused, bewildered, and beleaguered, Prince Harry attempting to convince the “Great Unwashed” that he is in full charge of his own life and foundation, who would believe that ?

BTW Harry, just how is it one would “Stockholm Syndrome” ?

The Arrogance and Entitlement knows NO Bounds and when it comes to those just mentioned they have no shame. Again, it remains to be seen if Bannon and his friends can defend their position but surely there must be better oversite by say an Auditor General to ensure that the funds donated by hard working individuals of any given income level can be assured that the funds they donate actually reach their intended recipient . Administration and other expenses such as travel etc. should never amount to more than 15% of any given Foundations over all budget, I am not one that believes in over regulation but this is an area that cries out for over site .

The abuse needs to stop now, I am very confident that there are literally hundreds of abuses by different Foundations and other Charities and NGO right across Canada and the U.S., time to audit each and every single one of them .

BTW, now that we are on the subject of Audits I would certainly ask for and approve of Audits for the three largest Cities of every Province in Canada and every State in the U.S., it is well known that Cities are cesspools of Corruption, Waste, Incompetence, and Mismanagement beyond compare, they can start with New York, Chicago, Vancouver, Victoria, D.C., Portland, and of course Seattle, Tax Payers, Home Owners, Renters, Business, and anyone else that works and pays taxes are being taking advantage of and the WASTE increases day over Day with NO end in sight . In Vancouver alone there are now 50 People Kind in various positions of communications, that is an increase from only 2 just 6 years ago, WHY ? That might be a good question for media to ask Financial Guru, Top Manager, and Mayor of Vancouver Kennedy Stewart, I am sure he would have that explanation right on the tip of his tongue . I have never watched or heard anyone that is more impotent, inept, incompetent, imbecilic, or incapable of leading than Vancouver Mayor Kennedy Stewart, can someone please explain to me why Kennedy needs to have a written prepared text just to make a statement of less than three sentences ? I know I am not being fair but doesn’t someone need to ask the questions ?

Let’s all keep in mind that over the past ten years Vancouver Property taxes have increased between 3 and 9% each and every year, my wife and I not too long ago sold a home that had Property Tax increases climb from $ 8,000.00 to about $ 32,000.00 in only TEN YEARS, did services improve, did the cost of services decrease because of efficiencies of the increases in PT, are streets cleaner, are parks still maintained, are streets in better repair, is municipal government smaller, more efficient, are we safer, is there less crime ? Hell, DO YOU even have a Police Force ? Please think about each and every one of those questions then ask your Mayor, Council, or Parks Board about any of them, I sure an answer an explanation would be forthcoming, of course mayor Kennedy “Will get back to you on that, I have NO prepared written answer” .

Did I somehow veer off topic here ? My apologies .

Personally I hope Bannon and his group have not over stepped here but just the same, this type of behavior needs to stop, again NO MORE than 15% for Admin etc.

One thing for sure though the DA of the Southern District of New York will do anything possible to charge anyone that has or had anything to do with the “Bad Orange Man” especially between now and November 3 . Please be very cautious, do not even rub up against the “Bad Orange Man”, you are at risk of serious criminal charges .

BTW former POTUS Barack Obama and his policies are the biggest reason why Donald J. Trump was elected President four years ago this coming November, when POTUS Obama took office in 2008 Obama and the Dems held the House, the Senate, and the white House, by the end of 2016 the Dems had lost them all and the Republicans won the House, the House, and of course the White House . Yes, sure, of course, the people of he US loved POTUS Obama and all of his policies, correct ?

Please also give this consideration, IMHO the attached video was the very night that Donald J Trump made up his mind to run for POTUS .All it took was a little push from President Obama, he knew what he was doing, did he not “

See, you do have POTUS Obama to thank for Donald J. Trump after all .

Then of course we have the “Mostly Peaceful Riots” spreading all over once beautiful and historical cities .

At least the good media coverage on this has resulted in the POS that committed the heinous crime to turn himself in, let’s hope that the prosecutor on this case manages to get a conviction that results in at least a 5 year sentence .

We can then end off with the almost unheard of coverage of Democratic POTUS hopeful Joe “Scissor Hands” Biden where Hollywoods Rose McGowan actually stands firm unlike other Hollywood and Entertainment Elite where she calls out her piers for protecting “Joey” from criticism and prosecution for his own “Hands On” approach to his own entitled existence .

Not to worry though I am sure that Michelle, Her Husband, Clooney, Kamala, Oprah, Nancy, HRC, Cher, Rob Reiner, AOC, Bernie, and several dozen

other Democratic Hollywood Elite will hold Joe to account and force him to explain his past behavior . Won’t they ?