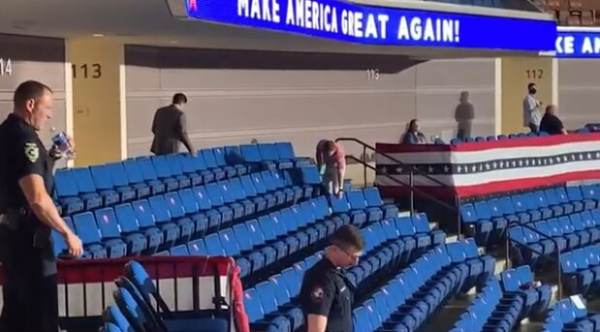 An article published several days ago written by an anonymous attendee made the claim that the management for the BOK Center in Tulsa, Oklahoma sabotaged attendance for the campaign rally by President Trump held there last Saturday resulting in thousands of empty seats in the BOK Center and the cancellation of plans for Trump and Vice President Pence to speak to an expected overflow crowd of thousands on a stage set up just outside the arena before speaking at the rally inside.

The fire marshal and arena management put attendance at just over 6,000 while the Trump campaign claimed 12,000 had cleared metal detectors.

A June 25 report by Armstrong Economics claimed that early in the day on Saturday BOK Center staff had placed stickers on every other seat in the arena barring use thereby cutting in half the attendance of the 19,199 seat arena. That report was not corroborated until Friday and Saturday when Billboard and the Washington Post respectively reported on the stickers and pushback by the Trump campaign that had campaign workers peeling the stickers off the seats right before the rally.