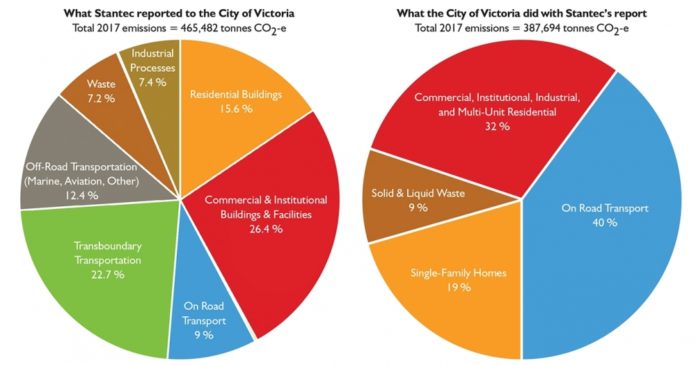 AN ENGINEERING COMPANY’S REPORT obtained from the City of Victoria through an FOI request shows that the City cheated on its first attempt to plot a critical path to lower territorial greenhouse gas emissions. The way in which the report’s findings were changed suggests that the City was intent on manufacturing information for its Climate Leadership Plan that would provide support for policy directions it was already pursuing, or wanted to pursue.

Stantec Engineering was hired by the City to assess the municipality’s emissions in 2017. The City published its Climate Leadership Plan (CLP) in 2018 (see link at end of story).

Focus reviewed the CLP in mid-2019. While the 66-page report is full of high-level visions and soft goals, the only hard information about emissions, and how those might be reduced, were numbers that appeared in percentage breakdowns of the sources of emissions, and in a wedge graph titled “Pathways to 2050 GHG Emissions Reductions.” These were attributed to a “GPC Compliant Inventory, 2017.” Focus requested the inventory and the City released Stantec’s report to us in late October. There are several interesting differences between the information in the City’s Climate Leadership Plan and Stantec’s report.