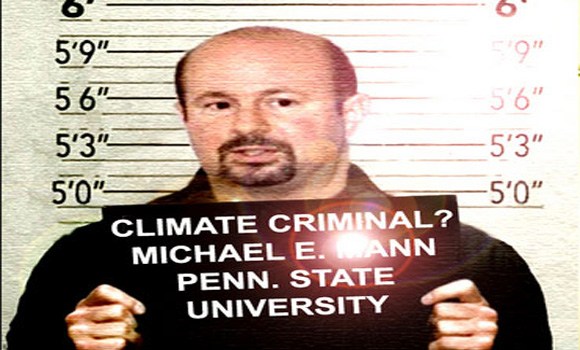 The Canadian court issued it’s final ruling in favor of the Dismissal motion that was filed in May 2019 by Dr Tim Ball’s libel lawyers.

The plaintiff Mann’s “hockey stick” graph, first published in 1998, was featured prominently in the U.N. 2001 climate report. The graph showed an “unprecedented” spike in global average temperature in the 20th Century after about 500 years of stability.

“Michael Mann’s Case Against Me Was Dismissed This Morning By The BC Supreme Court And They Awarded Me [Court] Costs.”

A more detailed public statement from the world-renowned skeptical climatologist is expected in due course.

Professor Mann is a climate professor at Penn State University. Mann filed his action on March 25, 2011 for Ball’s allegedly libelous statement that Mann “belongs in the state pen, not Penn State.”  The final court ruling, in effect, vindicates Ball’s criticisms.

Previously, on Feb, 03, 2010, a self-serving and superficial academic ‘investigation‘  by Pennsylvania State University had cleared Mann of misconduct. Mann also falsely claimed the NAS found nothing untoward with his work.

But the burden of proof in a court of law is objectively higher.

Not only did the B.C. Supreme Court grant Ball’s application for dismissal of the 8-year, multi-million dollar lawsuit, it also took the additional step of awarding full legal costs to Ball.

This extraordinary outcome will likely trigger severe legal repercussions for Dr Mann in the U.S. and may prove fatal to alarmist climate science claims that modern temperatures are “unprecedented.”

According to the leftist The Guardian newspaper (Feb, 09, 2010), the wider importance of Mann’s graph over the last 20 years is massive:

“Although it was intended as an icon of global warming, the hockey stick has become something else – a symbol of the conflict between mainstream climate scientists and their critics.”

Under court rules, Mann’s legal team have up to 30 days to file an appeal. For readers interested in accessing the court website directly, use this link.

‘Hockey Stick’ Discredited by Statisticians in 2003

In 2003 a Canadian study showed the “hockey stick” curve “is primarily an artefact of poor data handling, obsolete data and incorrect calculation of principal components.” When the data was corrected it showed a warm period in the 15th Century that exceeded the warmth of the 20th Century.

So, the graph was junk science. You could put baseball scores into Mann’s Climate Model and it would create the Hockey Stick.

But the big question then became: did Mann intentionally falsify his graph from motivation to make profit and/or cause harm (i.e. commit the five elements of criminal fraud)?

No one could answer that question unless Mann surrendered his numbers. He was never going to do that voluntarily – or face severe consequences for not doing so – that is, until Dr Ball came into the picture!

Evidence in Legal Discovery and the Truth Defense

Dr Ball’s legal team adroitly pursued the ‘truth defense’ such that the case boiled down to whether Ball’s words (“belongs in the state pen, not Penn State”) after examining the key evidence (Mann’s R2 regression numbers) fairly and accurately portrayed Mann.

The aim was to compel the plaintiff (Dr. Mann) to show his math ‘working out’ to check if he knowingly and criminally misrepresented his claims by resorting to statistical fakery (see: ‘Mike’s trick‘ below).

In the pre-trial Discovery Process the parties are required to surrender the cited key evidence in reasonable fashion, that they believe proves or disproves the Claim.

Despite Ball’s best efforts over 8 years, Mann would not agree to surrender to an open court his math ‘working out’ –  those arcane R2 regression numbers for his graph (see Mann’s latest obfuscating Tweet in the ‘update’ at foot of this article).

But throughout 2017 and 2018 any reasonable observer could see through such endless delays from the plaintiff  – all just attritional tactics.

The Penn State professor had persistently refused to honor the binding “concessions” agreement he made to Ball which ultimately gave his legal team the coup de grace to win the case  for the defendant due to Mann’s ‘Bad Faith’ (see: legal definition here).

Dr. Ball always argued that those numbers, if examined in open court, would have conclusively proved Mann was motivated to commit a criminal fraud. It was at this point legal minds could discern Ball was closing in on victory – a triumph for ‘David over Goliath.’

And Mann certainly is a science ‘Goliath.’ Ever since featuring so famously in the UN IPCC 2001 Third Assessment Report (TAR) Mann’s graph has been an iconic image cited relentlessly by environmentalists clamoring for urgent action on man-made global warming.

For the past two decades the biased mainstream media has acclaimed Mann as “a world-leading climate scientist” and last year he was heralded as their champion to help dethrone “climate denier” President Trump.