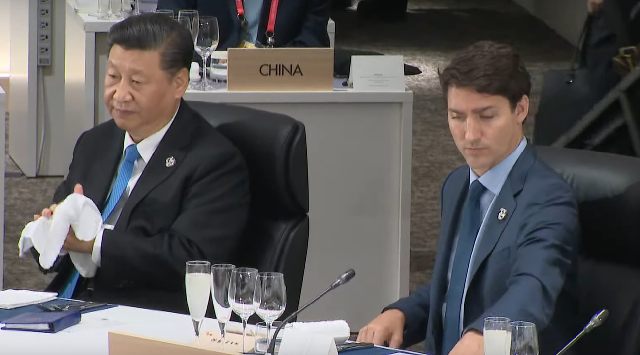 The two leaders didn’t speak even while seated right next to each other.

There was evident tension between Justin Trudeau and Xi Jinping at the G20 meeting in Osaka, Japan.

Despite being seated next to each other, there was no sign of the usual superficial pleasantries, with both sitting stony-faced and not reacting.

This isn’t a bad thing on Trudeau’s part, as it would have been out of place for him to be super-friendly with Xi considering how poorly China has treated Canada.

At a different point, Trudeau and Xi had a short conversation on the sidelines of the summit.

Yet, as reported by Mercedes Stephenson, the PMO has refused to say whether the stony-faced sit down was before or after the informal chat, raising the possibility that things really didn’t go well.

“The PMO says that Trudeau and Xi spoke briefly later and described it as a constructive interaction. They would not disclose whether that interaction was before or after the video of the leaders sitting next to each other but not engaging”