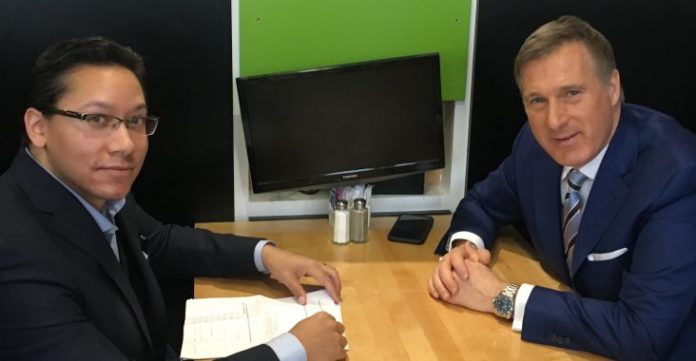 I recently sat down for an interview with Maxime Bernier while he was in Winnipeg, to discuss some of the biggest issues facing Canada, a possible post-election scenario, and much more.

Here’s what he had to say:

To start, I asked him what he felt made the People’s Party different than other parties:

“The most important, I think we’re doing politics differently. People appreciate that. We’re not trying to please everybody.”

He said that “if we try to please everybody, we’ll end up displeasing everybody.”

“We don’t also pander to every special interest group. For us that is not a slogan or a buzzword, that is a reality. The best example is our opposition to supply management. That for us is a big test, because what I’m saying is if the other leaders are unable to resist pressure from the cartel of supply management, like they did – the Trudeau government, the NDP, Andrew Scheer, how will they be able to resist pressure from other interest groups?”

He also said there are “no taboo debates” in the People’s Party, and that they’re trying to speak from “conviction” as opposed to a “consensus.”

“First of all, I’ll say that the fact that we don’t have any pipelines, the fact that the industry is in a position to sell to only one client, the US, that is having a big discount, because as you know the price that we are having for our natural resources are lower than if we were able to see that to other clients.”

Bernier said we need pipelines, and the “federal government has a responsibility there.” He then mentioned that with bill “C-69, it will be worse. The process for building pipelines for other important energy projects will be very tough.”

He joked that Elizabeth May – his seatmate in the House of Commons – also opposes Bill C-69 – “but not for the same reason,” since May wants even more regulations.

Bernier also said the tax system “is not competitive right now,” and that “we need to lower taxes for every single entrepreneur in this country.”

“Because of bad policies in Ottawa, that is not helping the oil and gas industry in Western Canada. Yes also there is global impact, but first we need to have the right policies, and I think people in Ottawa, other politicians in Ottawa, mostly the Liberals, are going in the wrong direction.”

Bernier added that it’s “awkward” how all the politicians are in “Ontario and try to help GM, but they’re not doing anything for Western Canada.”

“They don’t want also to speak about the equalization formula that is unfair and inefficient, for them it’s a subject they don’t want to speak about, but I think we must. So, they want to do everything to help workers in Ontario, but here [Western Canada], since 2014 the economy is not going very well and the government is putting in place the wrong policies.”

I then asked Bernier about the announcement by GM that they are leaving Oshawa. How did he feel, having been in the Harper government when the auto sector was bailed out, and what would he do if he was PM today? Would he be open to another auto bailout?

“No, Never,” said Bernier about another auto bailout.

Read the Rest of the Interview HERE