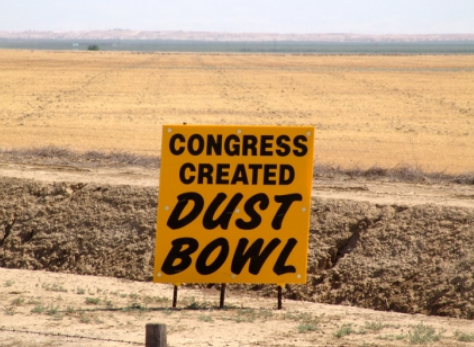 California: President Donald Trump signed a memorandum to combat burdensome regulations caused by lawsuits from environmental extremists that have severely cut water supplies to farmers, caused man-made droughts in the Central Valley, and flushed billions of gallons of fresh water out to the ocean for “environmental” purposes.  Trump’s memorandum directs federal agencies to implement a strict timetable for rewriting the biological opinions that lie at the root of the water crisis.  This executive action also prioritizes building critical projects to expand water storage in the state to store more water during wet years for use in dry years.

Republicans have long argued that too much water has been diverted from farming and from household use to environmental priorities, thanks to lawsuits by environmental groups, and to unfriendly state and federal agencies.

Related Story from 2009 with Sean Hannity and the Valley Hope – Incredible story which led to the Man Made Drought of the San Joaquin Valley, one of the Richest Bread Baskets in the World became a Dust Bowl…. President Trump is going to right this one…