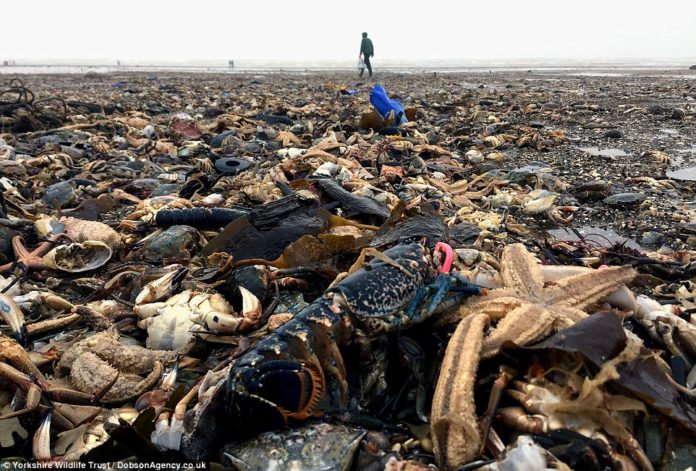 By Mark Duell For MailOnLine

Beachgoers were left shocked after a devastating scene of millions of sea creatures from fish to lobsters washed up on the shore.

Big tides and gale force winds from Storm Emma are believed to have caused the huge dump of animals along the East Yorkshire coast.

Incredible pictures show Fraisthorpe beach near Bridlington blanketed by tonnes of the creatures, with a group of fishermen battling to save some of the marine life still alive.

One of them, Jack Sanderson, labelled it a ‘war zone’ as he attacked members of the public for trying to scavenge live under-sized lobsters while he and other commercial fisherman piled them into buckets and boxes in a bid to release them back into the sea.

It comes after tens of thousands of dead starfish were also washed up at Ramsgate in Kent following the severe weather, with witnesses saying the scene looked ‘like the armageddon’.