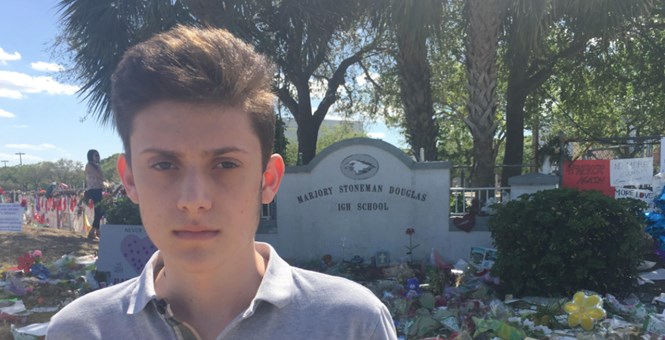 PARKLAND, FLORIDA — On the afternoon of February 14, 2018, Kyle Kashuv found himself in the midst of a waking nightmare, huddled in a classroom closet for two harrowing hours, attempting to console and reassure terrified fellow students.  An apparent fire drill had abruptly turned into a bloodbath after a gunman calculatingly lured potential victims into the halls of Marjory Stoneman Douglas High School by pulling the fire alarm — a ghoulish maneuver designed to maximize the bodycount.  Teachers began following protocol by locking classroom doors after an active shooter alert was announced over the campus intercom system.  Kashuv ended up piling into one room only after an instructor made a judgment call to unlock her door to accommodate a group of panicked students. The closet felt “like the safest place to be,” he remembers. “I was trying to calm people down who were crying hysterically, letting everyone know that everything would be alright.”  Kids frantically checked their phones and social media feeds for emerging information as they remained holed up, waiting for a SWAT team’s liberation.  It finally came around 4:30pm.  They had survived; seventeen others had not.

This southeastern Florida community is still reeling.  On a warm Sunday afternoon, people are milling around a makeshift memorial that lines the fence outside of the school. It’s filled with layer after layer of placards, flowers and candles.  Passers-by slow down as they drive past the scene of this heinous crime; some pull off the road and simply stare.  In a nearby park, Kashuv, a 16-year-old junior, is matter-of-factly relaying his personal story from that horrible day, probably for the umpteenth time. He’d reached out to me through Twitter, expressing a willingness to talk about his experiences and the state of public debate over what happened inside his school a few weeks ago.  With his parents’ permission, I agreed to meet him.  He has a lot to say but can’t help but wonder aloud if many in the mainstream media have any interest in listening.  Some of his schoolmates have gained prominence as television mainstays in the aftermath of the killings, their opinions validated with verified social media statuses, amassing millions of followers in the process. Kashuv is just as much a Parkland survivor as now-familiar names like David Hogg and Cameron Kasky, yet his views have only garnered limited attention.

I ask him why he thinks that’s the case. “I don’t know,” he says, hesitantly. “Maybe because I don’t use inflammatory language.  I speak calmly and logically without much emotion. I don’t necessarily make the very best headline.”  He’s politely referring to some of his more “famous” peers’ propensity to launch provocative and partisan attacks, such as repeated assertions that people who disagree with their political or policy preferences “don’t care” about dead children, or have ‘blood on their hands.’  But Kashuv knows that the disparate treatment he’s lived isn’t merely attributable to stylistic differences; he’s convinced that the substance of his views is what has diminished his appeal to many activists and journalists.