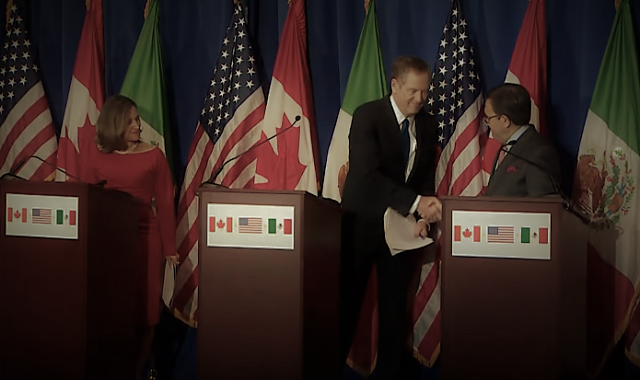 Gap between Canada and the US on NAFTA still remains as negotiations continue.

There are reports that the United States is considering the possibility of signing a separate NAFTA deal with Mexico, concluding negotiations with that country even as negotiations continue with Canada.

According to the CP, “The United States trade czar is expressing frustration with Canada in the NAFTA negotiations, even floating the idea of concluding a quick agreement with Mexico and sorting out a deal with Canada later, according to an American lawmaker who attended a meeting with him Wednesday. Ron Kind is one of numerous congressmen who attended a rare briefing on Capitol Hill with U.S. Trade Representative Robert Lighthizer, who Kind said brought up the notion of splitting the NAFTA negotiations as a way of advancing the talks.”

Kind, a Democrat from Wisconsin, said “He thinks more progress has been made with Mexico. And that there might be a way to wrap things up and down and just maintain ongoing negotiations with Canada at that point,” adding “He would not be dissatisfied with just doing a bilateral with Mexico and continuing negotiations (with Canada).”

While floating such a move may be a negotiating tactic, it also shows how wide the gap between Canada and the US remains on NAFTA talks.