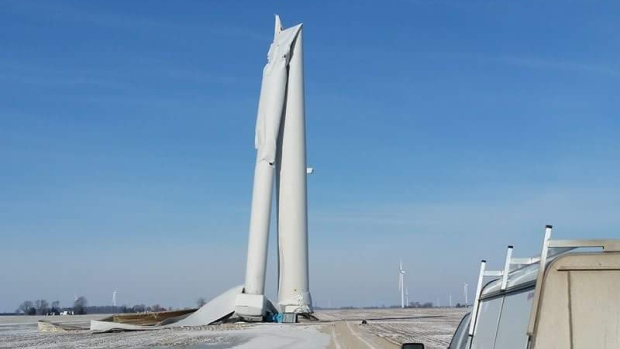 (A collapsed wind turbine in Chatham-Kent is renewing calls for wind projects to be stopped. (Monte McNaughton/Twitter)

A wind turbine in Chatham-Kent, Ont. has snapped in half, leading to calls from one area MPP to halt area wind projects.

The turbine in Raleigh Township, near the corner of Drake Road and the 16th Line, collapsed on itself Friday.

“As we were getting closer you could see in the distance that it was snapped in half .. it’s actually one of those ‘Oh my goodness [moments],” said Chatham-Kent Ward 2 councillor Karen Herman. “I was so surprised to see something like this. The blade is wrapped around the bottom of it and the engine is on the ground.”

The Turbine is owned by TerraForm Power. The company confirmed one of its turbines collapsed Friday and that crews are investigating the cause.

“The issue did not cause any injuries or impact to the broader community,” wrote spokesperson Chad Reed in a statement emailed to CBC News.

Chatham-Kent’s Fire and Paramedic Chief Bob Crawford said the turbine has been disconnected from the grid.

“With safety being a priority, workers are currently putting up safety fencing around the broken turbine and Chatham-Kent Police are also present,” he added.

Lambton-Kent-Middlesex MPP Monte McNaughton shared a photo of the mangled turbine on Twitter and used it as an opportunity to renew calls to stop two upcoming wind projects in the area.

“The Liberal government should put a halt to the Otter Creek and North Kent projects immediately, put a moratorium on them so we can look into the safety issues of turbines,” he explained.