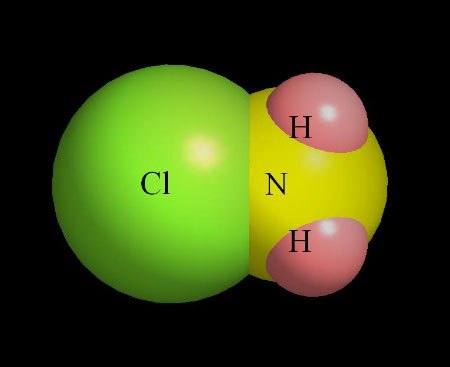 Chloramine is a toxin added to the drinking water.  It is a secondary disinfectant used by many states as a primary disinfectant. Chloramine is ammonia added to chlorine to make chloramine. Chlorine has been shown from animal and human research to cause breast cancer and miscarriages  in humans. Chloramine is listed in the MSDS industrial chemistry book with a “skull-and-cross-bones” changed by the Government to an “X”.  Chloramine is only to be used in an emergency to attempt to destroy emerging or reemerging pathogens  which include  Gigardia lambia liver flukes and Cryptospoidium in humans. Chloramine is not proven  efficient at a dose-level LD 50 kill-level without being a precursor for cancer potential in humans and animals.  Resistance to conventional disinfectants and the ability to grow in the distribution system are the key factors in the emergence of protozoan and bacterial pathogens like Naeglera fowleri (also known as the brain-eating amoeba) is a water-borne pathogen in warm water transmitted into the nasal passage to cause meningoencephilitis in humans.

Various strains of adenoviruses are known to be transmitted via the drinking water resources causing eye and gastrointestinal infections. And not influenced in an adverse way to decrease the threats to the human and animal  immune system. Adenoviruses are also known to be highly resistant to low-pressure ultraviolet light disinfectants finally being in a few cases used to treat drinking water. A new strain of adenovirus (adeno 36) found in drinking water is further associated with obesity. Studies have found that 30 percent of obese persons test positive for adeno-36 compared to 11 percent of non-obese individuals. Laboratory rats have a significant weight gain, raising the question as to whether or not obesity could be a symptom of infectious disease and continue as a precursor to cancer in humans and animals. (Reynolds, K.A. , Infectobesity, May, 2010).  The superbug bacterium known as MRSA (methicillin-resistant Staphylococcus aureus ) has  been shown to survive in waste water, tap water and biofilms where survival can be days to weeks. (David M.Z. , Community-associated MRSA, Clinical Microbiology Vol.23) Chloramine does not have an antidote and is genotoxic, meaning DNA destruction and is mutagenic, meaning it causes tissue mutations.

The Environmental Protection Agency (EPA) mandated in 1989 (I peer-reviewed over 300 medical and clinical research areas and global science research on humans that took place for the deleterious effects of recycled water and chloramine toxic water in and on humans that had taken place for nearly forty-years) that ammonia be placed with chlorine for chloramine in spite of   empirical evidence that chloramine initiated leukemia in experimental rats and cancer of the liver in experimental rats and osteomyelitis and bone marrow cancer favoring human females and bladder cancer favoring human males and neural-tube mutations in fetuses and breakage of sperm tails for infertility in human males.  The Environmental Protection Agency (EPA) mandated dose-related criteria with a $10,000 fine to water disposal districts in 1998 if they did not add ammonia to chlorine in the drinking water knowing that leukemia could be augmented in experimental rats and cancer of the liver in experimental rats had been shown in their own research. Nearly thirty-five years of human research which is inclusive of EPA research indicated osteomyelitis in human females was predominant and bladder cancer for human males was  predominant with disinfectant by-products and trihalomethanes from chloramine biochemistry in the human body.

The past human and animal research does not fit the present EPA protocols  to continue the cancer research from chloramine since chloramine is considered dose-related and will influence more of  a lower socio-economic population under the theory of present medicine that “a little bit of toxin will not harm you.”

Chloramine cannot be boiled out of the water and can kill fish in hobby tanks. The fluid is formaldehyde added to the hobby tanks and hobby pools to keep the hobby fish alive for a short time.

Hemodialysis patients have a special consideration not to have chloramine in their blood. They could die in minutes. Extensive carbon filters are not an appropriate state-of-the-art solution to take nitrogen out of the ammonia.

Chronic kidney disease causes organs to slowly lose their ability to filter waste out of the bloodstream.  Many of the approximate 20 million estimated to have kidney disease do not know it. Water Utility Districts are asking humans to be human processing plants for the chloramine in the body under the guise that gastric acids will neutralize the toxins from the water ignoring the Krebs cycle of the biochemistry of the liver that can become progressively deteriorated with the toxins urinated back into the toilet water into the ecosystem from toilet-to-bio ecosystem to irrigation water to food chemistry and back into the body through plants and animal protein that metabolizes proteins that are now genetically coded for the toxins to prevail in the reactive nitrogen cycle of the earth contaminated plant and animal ecosystem that we eat and drink.

There are presently known over 1,900 disinfectant-by-products and hundreds of disinfectant-by-products and tri-halomethanes in the drinking water with several known secondary carcinogenic products from the chemistry pathway where many  are not tested as Government Agencies redefine the definition of cancer-causing water toxins.  Scientists have long recognized that microbes aid in the formation of ice crystals. Dust and pollution aerosols can seed clouds and affect rainfall patterns. When microbial dust land on snow, the snow becomes darker and melts earlier. These influences can have implications for water supply. Numerous studies have found an association with seasonal dust storms and increased allergies, asthma and silicosis pulmonary fibrosis risk. U.S. researchers further isolated 95 bacteria from dust events in Bamako, Mali. Of these five percent were potential plant pathogens and twenty-five percent were opportunistic human pathogens, including Acinetobacter, Staphylococcus and others. (Smith, D.J. Applied Environmental Microbiology December 7, 2012) The present estimated cost to repair the water infrastructure is estimated at $16T. Human and animal medicine used as a processing plant for such as recycled water is  missing an electron and can bioaccumulate the nitrogen-toxins from an impaired kidney, liver or impaired immune system such as AIDS.  Even  a vaccine for AIDS will not be  sufficient to overcome the present toxic biomarkers and conjugates of genetic toxicity of the mutagenesis and genotoxicity of chloramine in the biochemistry of the body of humans and animals. The bioaccumulation of amine toxins and secondary cancer products such as Bromides from the chemistry of water toxins are going to accumulate even in various dosages of ammonia to chlorine in the drinking water.  The Unites States Public Health Physicians know this and still on a “voice vote” without protocol peer-review  examination said that in spite of these findings “there were no adverse effects.”  (This policy as  promulgated can set as a dangerous legal-policy  precedent  for future Government decisions by the Senate confirmed science-and-technology Czar  for the present President and future Presidents.)

Chloramine in drinking water can enter the digestion and blood stream in another form called nitrogen balance. Nitrogen balance refers to the difference between nitrogen intake and total nitrogen loss in urine, sweat and bowel elimination. Ammonia derived mainly from the breakdown of amino acid pathways is toxic to animals. Human tissues therefore, initially detoxify ammonia by converting it to glutamine for transport to the liver.

Collateral  health damage from ammonia upsets the pH balance of the body. If the liver is functioning properly, it releases ammonia converted into no-toxic nitrogen-rich compound urea in the urine. If the amine of the liver is compromised, ammonia accumulates in the blood and generates serious consequences.

Thyroid damage from perchlorate and other secondary carcinogens in healthy men and the white cell damage to decrease immunity are accentuated by iodate and haloacetic acids in the drinking water and biochemistry pathway. Perchlorate in the drinking water causes follicular thyroid cancer and does NOT dissipate from the body in nine days as proclaimed by Deans of Medical Schools.

Chloramine has been identified in causation of infrastructure pipe deteriation releasing lead and other toxins from pipes eaten away by chloramine throughout America. Estimated cost is $16 trillion to repair the pipe infrastructure for America.  The coming world war for water is a National Security issue for the repair of the pipe infrastructure and economy-of-scale health care costs for chemical  contaminated water for human health is estimated at $27 trillion in cost and life  decrease of the human population and a sterility probability  of thirty-five percent in the  American population and global sterility from water toxins to reach a thirty-percent probability with a standard- deviation of error of three percent in the estimate of human life. Collateral health and life damage for animals for food is very high.

Health Officers throughout America  who are in most part medical physicians and politically appointed, are using antiquated  epidemiology models for continuing the use of chloramine in drinking water by stating, “there is not a substantial adverse effect” from it use. In clinical medicine: this is called medical negligence with unexplained American rash’s and metabolic disorders from patients and undiagnosed symptoms with cytokine immune disorders that cannot be tested to satisfy the economy-of-scale in order to have selected statistical deaths to favor decreased costs for infrastructure costs verses  the present health care system to conform to present Government health care rationing (by age and gender)  to eliminate important clinical laboratory tests under the guise of reducing costs.

When (Fluoride) fluorosilicates in water pass through lead-bearing pipes and fixtures, the fluorosilicates extract high levels  of soluble lead from lead-brass metal parts (researchers from  the Environmental Quality Institute performed the actual experiment). In research  published in Neurotoxicology, researchers found that the mixture of two chemicals: disinfectant of especially chloramine or chlorine with fluorosilicic acid has a drastically increased potency for leaching high quantities of lead. University North Carolina researchers concluded as I have from my research that quantities of fluoride added to the drinking water with purported benefits may, in fact, precipitate a cascade of serious health problems for the heart, kidneys and blood and cause irreversible neurological damage impairing reproductive function, especially when chloramines and lead pipes are in the paradigm.

The long term solution is to eventually replace all significant lead-bearing materials that are used in the water system, additionally, changing to a better state-of-the-art to not have a  deleterious use of recycled water made from sewage water that is blended with drinking water that has also been recycled that has a missing electron in the reconfigured water molecule (which can have a deleterious effect on the pancreas and adrenal gland for electrolyte hormone balances). City officials and city councils under sustainability of Social Justice Policies under the United Nations protocol will deny this is happening.

We need a national Constitutional movement at the headwaters for alternative water engineering technologies (which I have presented to the United Nations) for such as ozonation and  plasma laser activation plants as developed for outer space, reverses osmosis for advanced water engineering quantum physics and the replacement of the inferior pipe infrastructure beyond present trenchless technology. Decrease of health costs alone will provide the economy of scale for end-organ diseases in America.  After installation of alternative technologies we will not have to set tort damage caps in the Federal Tort Law from wrongful death suits in different State jurisdictions and Appellate Courts in equity and quality-of-life Medicare lawsuits resulting from rationing panels in taxable Obamacare.

Since chloramine is a toxin added to the water, water qualifies to be labeled nationally as a toxin. Bottled water under Internal Treaties should have a label of ingredients for disinfectant by-products. We as Americans should have a Constitutional right to vote what is in our water and in our food supply irrigated by the toxic water.