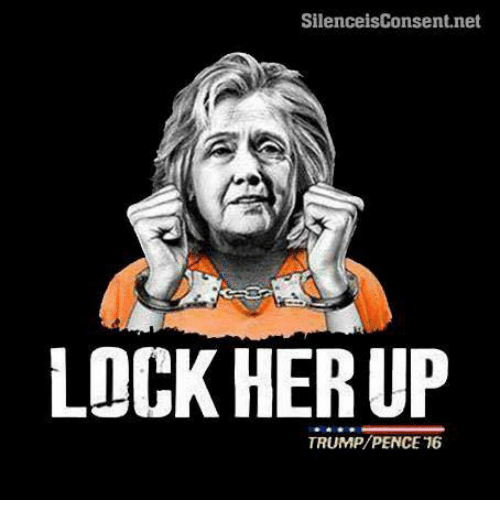 When Donald Trump gets hit, he always hits back even harder.  So when the deep state decided to conduct a legal witch hunt against President Trump and his family, they should have expected that Trump would return the favor.  In recent days, there have been all sorts of rumblings about sealed indictments, pending arrests and a “deep state takedown”.  Many believe that we are on the verge of seeing some of the most prominent Democrats in the entire nation being arrested and thrown in prison.  We shall see how all of this plays out, but in this article I am going to focus on the things that have been confirmed so far.

First of all, let’s talk about the documents that are going to be released on Friday.  According to Judicial Watch President Tom Fitton, the State Department is scheduled to release 2,800 government documents which were found on Anthony Weiner’s laptop…

Remember, this is just a portion of the documents that were found on his laptop, and the really juicy stuff is almost certainly not going to be found in these government docs.

There are persistent rumors that the really juicy stuff on his laptop contains evidence of sexual misconduct by top Democrats that would far surpass anything that has come out about members of Congress so far.  We are potentially talking about the type of stuff that could send people to prison for life, and we need to keep demanding for that material to be released to the public as soon as possible.  I understand that there are ongoing investigations that cannot be compromised, but there is no excuse for things to drag on for this long.

But without a doubt, there could potentially be some gamechanging material in the docs that we will get to see tomorrow.  The following is what Judicial Watch previously had to say about these documents…

“This is a disturbing development. Our experience with Abedin’s emails suggest these Weiner laptop documents will include classified and other sensitive materials,” said Judicial Watch President Tom Fitton. “When will the Justice Department do a serious investigation of Hillary Clinton’s and Huma Abedin’s obvious violations of law?”

Judicial Watch previously released 20 productions of documents in this case that show examples of mishandling of classified information and instances of pay to play between the Clinton State Department and the Clinton Foundation. Also, at least 627 emails were not part of the 55,000 pages of emails that Clinton turned over, and further contradict a statement by Clinton that, “as far as she knew,” all of her government emails had been turned over to department.

Based on just the evidence that we have so far, Hillary Clinton should clearly be going to prison, and let us hope that this latest development will move things in the right direction over at the Department of Justice.

Meanwhile, one of the other pieces of the puzzle that has been confirmed is a very curious executive order that was just issued by President Trump.  The following comes from Zero Hedge…

The Trump Administration quietly issued an Executive Order (EO) last Thursday which allows for the freezing of US-housed assets belonging to foreign individuals or entities deemed “serious human rights abusers,” along with government officials and executives of foreign corporations (current or former) found to have engaged in corruption – which includes the misappropriation of state assets, the expropriation of private assets for personal gain, and corruption related to government contracts or the extraction of natural resources.

Furthermore, anyone in the United States who aids or participates in said corruption or human rights abuses by foreign parties is subject to frozen assets – along with any U.S. corporation who employs foreigners deemed to have engaged in corruption on behalf of the company.

Many believe that this executive order is directly related to ongoing investigations into corruption within the Democratic Party.

More specifically, the wording of this executive order definitely sounds like it could have been written with Bill Clinton, Hillary Clinton, Tony Podesta and Uranium One in mind.  Here is more from Zero Hedge…

Now consider that if reports from The Hill are accurate – an FBI mole deep within the Russian uranium industry uncovered evidence that “Russian nuclear officials had routed millions of dollars to the U.S. designed to benefit former President Bill Clinton’s charitable foundation during the time Secretary of State Hillary Clinton served on a government body that provided a favorable decision to Moscow (the Uranium One approval)” – a deal which would eventually grant the Kremlin control over 20 percent of America’s uranium supply right around the time Bill Clinton also collected $500,000 for a Moscow speech, as detailed by author Peter Schweitzer’s book Clinton Cash and the New York Times in 2015.

A very dangerous game is being played behind the scenes, and I believe that Trump is going to come out the big winner in the end.

Many on the left had been anticipating that 2018 would be the year when Donald Trump is finally taken down, but they will be bitterly disappointed when some of their most cherished heroes end up in shackles instead.

If the elite had not gone after Trump so brutally earlier this year, perhaps he would have been willing to let some things slide.  But once Robert Mueller was appointed as special counsel and given an unlimited amount of time, money and resources to dig up dirt on Trump, it was inevitable that Trump would try to find a way to strike back even harder.

We have never seen anything quite like this in the history of American politics, and I have a feeling that 2018 is going to be one of the most “interesting” years ever.

Reprinted with permission from The Economic Collapse.

The Best of Michael Snyder