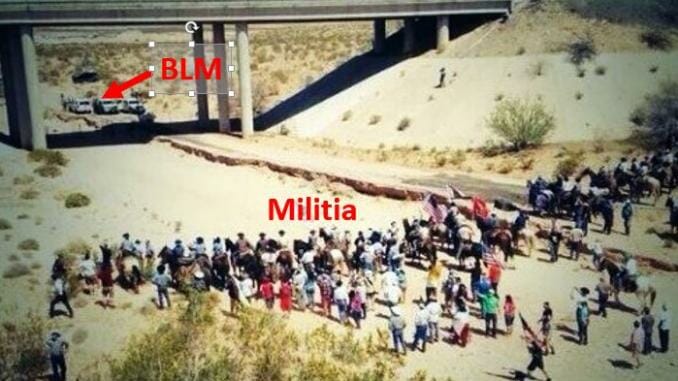 Nevada: Larry Wooten, a lead investigator for the Bureau of Land Management (BLM) of its 2014 attempt to force ​the Bundy family off their cattle ranch, submitted a memo to the Department of Justice that exposed BLM bias, corruption, and persecution of the Bundy family. The memo included the fact that the BLM failed to turn over important evidence to the prosecutor as is required by law. This was evidence that could have helped the defense of 19 defendants who consequently have spent two years in prison. ​-GEG​

Bunkerville, NV — The Bureau of Land Management’s (BLM) lead investigator into the failed Bundy Ranch operation that took place April of 2014 has blown the whistle in an effort to expose far-reaching misconduct, recklessness, corruption and unrestrained persecutory behavior toward the Bundy family.

The Bundys and other defendants are currently on trial for conspiring to stop federal authorities from confiscating family cattle after Cliven Bundy failed to pay grazing fees and fines for years. They’re also facing charges relating to using or carrying a firearm in a crime of violence, threatening a federal law enforcement officer, obstruction of justice and extortion. Their trial began Nov. 14 in Las Vegas.

According to a report by The Oregonian:

The memo comes from Larry Wooten, who had been the lead case agent and investigator for the U.S. Bureau of Land Management after the tense confrontation outside the patriarch’s ranch near Bunkerville. Wooten also testified before a federal grand jury that returned indictments against the Bundys. He said he was removed from the investigation last February after he complained to the U.S. Attorney’s Office in Nevada…

Then last Wooten sent a whistleblower email to the U.S. Department of Justice, alleging a “widespread pattern of bad judgment, lack of discipline, incredible bias, unprofessionalism and misconduct, as well as likely policy, ethical and legal violations among senior and supervisory staff” at the Bureau of Land Management’s Office of Law Enforcement and Security.

Wooten wrote that supervisory agents with the bureau repeatedly mocked the defendants in an “amateurish carnival atmosphere” that resembled something out of middle school, displayed “clear prejudice” against the Bundys, their supporters and Mormons, and prominently displayed degrading altered booking photos of Cliven Bundy and other defendants in a federal office and in an office presentation.

The memo described “heavy handedness” by government officers as they prepared to impound Cliven Bundy’s cattle. He said some officers “bragged about roughing up Dave Bundy, grinding his face into the ground and Dave Bundy having little bits of gravel stuck in his face.” Dave Bundy, one of Cliven Bundy’s sons, was arrested April 6, 2014, while videotaping men he suspected were federal agents near his father’s ranch.

Wooten contends that supervisory agents failed to turn over required discovery evidence to the prosecution team that could help the defense or be used to question the credibility of a witness, as required by law.

The revelations contained in the memo prompted Cliven Bundy’s attorney to file a motion to dismiss the case, which is already in shambles over the government’s failure to share evidence with the defense as required by law.

The judge subsequently sent the jury home for more than a week in an effort to determine the validity of the claims, as the prosecution scrambled to save their case against the Bundy ranch defendants.

Additionally, lead agents on the case “instigated” monitoring of jail phone calls without the consent of the U.S. Attorney’s Office or the FBI – essentially going rogue – until Nevada’s acting U.S. attorney Steven Myhre, who is leading the prosecution, put an end to the illicit surveillance.

The memo by Wooten accused special agent-in-charge of the Bunkerville/Gold Butte operation for the BLM, Dan Love, of intentionally ignoring U.S. Attorney’s Office directives and his BLM superiors “in order to command the most intrusive, oppressive, large-scale and militaristic trespass cattle impound possible.”