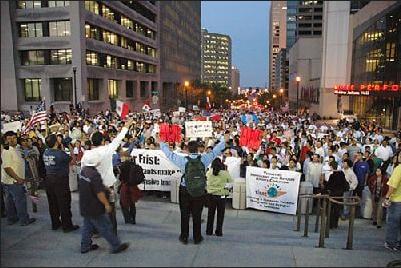 President Trump reportedly is close to ending Obama’s Deferred Action for Childhood Arrivals (DACA) program that gives temporary amnesty and work permits to 850,000 young illegal aliens.  A study by Facebook CEO Mark Zuckerberg’s open-borders organization showed that it would open nearly 700,000 jobs to American citizens.  The study unintentionally revealed how many additional job opportunities American workers would have if President Trump actually were to keep his campaign promise and repeal DACA. –GEG

A study by Facebook CEO Mark Zuckerberg’s open borders organization revealed that if an Obama-created amnesty program for young illegal aliens is ended, it would open nearly 700,000 American jobs.

Zuckerberg’s FWD.us group – a pro-immigration lobbying group – released the study with the intention to show the hardships of ending the Deferred Action for Childhood Arrivals (DACA) program, where more than 850,000 young illegal aliens have been given temporary amnesty would have on the American economy.

The study unintentionally revealed how many more job opportunities American workers would have if President Trump were to repeal DACA, as he promised his supporters he would do.

According to the FWD.us study, if DACA is repealed it would mean potentially 700,000 American jobs could open up for American citizens.

The study claims that on average, if Trump were to repeal DACA, 30,000 American job opportunities would open up each month. FWD.us President Todd Schulte touted the results of the study as a loss for America’s business community, saying it would have “severe consequences” on the economy.

“Eliminating DACA would have immediate and severe consequences for not only the 800,000 Dreamers enrolled in the program, but for the millions of Americans who live, work, and study with these young people every single day,” Schulte said in a statement.

Immigration hawks have long argued the booming illegal alien population–estimated between 12 to 30 million–and high levels of legal immigration, where the U.S. admits more than one million a year, contribute to the displacement of American workers and wage stagnation.

The open borders lobby and corporate interests teamed up over the last few months to defend DACA and demand the Trump Administration keep the program going.

A legal threat by a number of state attorneys general, including Texas’ Ken Paxton, could potentially force the Trump Administration to end the program or decline to defend the program in court.