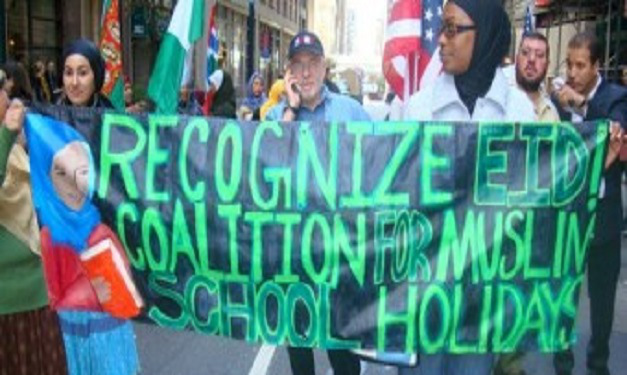 It began a decade ago with demands for special Islamic prayer rooms ON CAMPUS at Canadian universities … and after some caved in … pressures from Canada’s growing Muslim community have increased for PUBLIC  high schools in Canada to also provide special Muslim prayer spaces as well.

The issue has been making headlines in the Toronto area, and now there are revelations that schools in some Metro Vancouver municipalities are also providing special prayer facilities for their Muslim students as well.

The practice of religion (as opposed to the educational study of religions) should have NO PLACE in our PUBLIC schools … at any level.

If people want religion to be part of their children’s daily practices or inculcation, they have several choices: do it at home; send them to private religious educational institutions; or set up a privately funded facility nearby but off the public campus.

Public schools should bring people together … not separate them.

Amazingly, the increasing pressures to accommodate Muslim students and/or staff …  has happened at a time when not only educational institutions, but even cities across Canada have been increasingly DIMINISHING or even BANNING any celebration of  the religious aspects of  Christian holidays, such as Christmas and Easter.

I don’t buy the excuse that religious Muslims deserve special rights because they must pray five times a day and hold Special service on Friday.  Don’t religious Jews pray three times a day? What about a daily Catholic mass? Or Confession? And who knows what facilities might be expected to equally respect Buddhists, Sikhs, Hindus or various First Nations beliefs and practices!

This is QUITE different from accepting and respecting religious or cultural requirements, such as wearing a kirpan, turban, hijab or skullcap … NONE of which ask for public facilities or funding.

Demanding a separate room to carry out services for any faith is unreasonable and creates special privilege. So why  are Muslims getting special RELIGIOUS facilities and rights in PUBLIC taxpayer-funded schools?

Because as the numbers of Muslims in Canada have grown substantially, so have the demands for special accommodation by some of their members,  our politicians … unfortunately, rather than lead and uphold the hard-fought principle of separation of “church” and state,  are caving in … for ethnic votes.

It is truly political correctness gone mad!   When EQUAL treatment for all is pushed aside.

It’s time to stand up and protect the SECULAR nature of Canada’s PUBLIC educational institutions and politely say NO to any religious groups that demand WE give THEIR KIDS special privileges and publicly funded facilities.