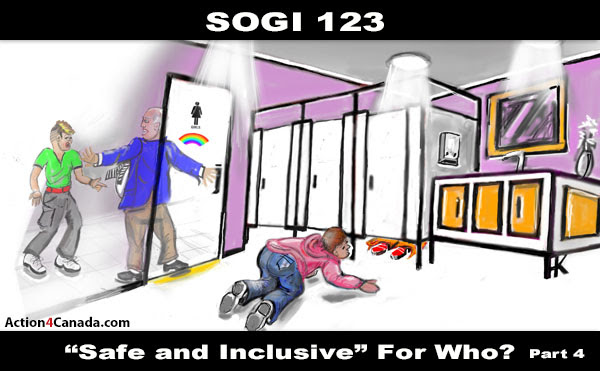 This is Part 4 of Action4Canada’s series to expose the LGBTQ sex activist’s agenda to sexualize and groom children via the education system, bringing into question their mantra that the SOGI/CSE program is about “creating safe and inclusive” schools. The reality is that this program is a Trojan horse, brought into the schools under the guise of anti-bullying and supposedly to teach children to be “inclusive” and support LGBTQ2+ students. However, the SOGI 123 resource goes way beyond this and in fact indoctrinates children into unhealthy sexual behaviour and confuses them through lies and misinformation. It is only inclusive for LGBTQ2+ students and those who are agreeable with their twisted ideologies. Anyone that opposes or questions their deviant agenda is viciously attacked and persecuted.

We will not be silenced by their attacks or forced to accept the unacceptable!

Join us to hear the testimony of Garret Carr, a BC father who is standing behind his son’s decision to confront another student who was sexually harassing female students at Prince George Secondary School. The perpetrator (perp) student is described as gay, and had been given permission to use the girl’s washroom. It was reported that he had repeatedly been seen peeking at girls who were in the stalls, and often having an erection. A young female student, 16, had told the vice-principal Keith Wood about this situation and how “it was making her and other young girls uncomfortable”, at least seven times. Mr. Wood’s reply was “I cant stop him from using the girls bathroom as he is allowed to use the washroom as he is gay.”

Garret’s son ended up punching the perpetrator in the face in an attempt to defend the female students and as a result is being charged with assault and “public incitement of hatred” and must appear in court in January 2023. The gay boy was reclassified as trans to meet the hate crime requirements. Learn more about this shocking story and share this Empower Hour. 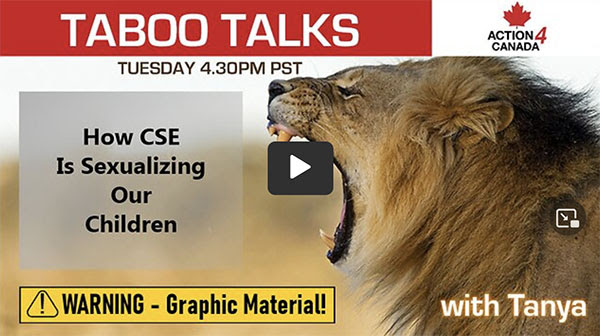 In this video Tanya Gaw talks about how SOGI 123/Comprehensive Sexuality Education (CSE), a program promoted by the United Nations, is sexualizing and grooming children across Canada. Tanya discusses how the sexualization is further advanced by public libraries who organize drag queen story time sessions for young children and also provide them with access to pornographic materials.

Tanya does not mince words or hold back any punches in exposing those behind this radical agenda, that is confusing children and leading many ‘minors’ to take harmful hormone blockers and undergo gender reassignment surgery. All under the guise of ‘safe and inclusive’ education. 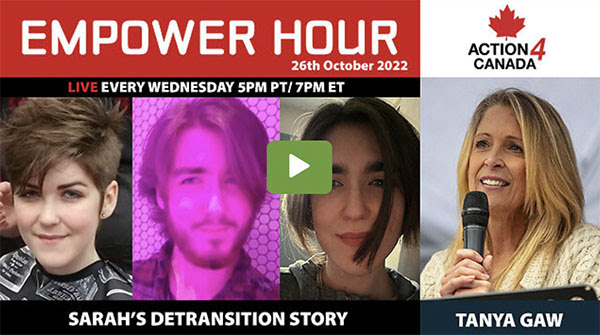 Sadly Sarah’s story is not an isolated situation as this social contagion rapidly spreads amongst young people. Family after family are falling victim to the life altering consequences of the wicked CSE agenda.

We have to fight for our kids and get this evil agenda removed from the education system.

Action4Canada created the Notice of Liability to advise Trustees, Ministers, Teachers, Librarians etc, that they will be held personally liable for exposing minors to any form of pornography/sexually explicit material, activities or organizations promoting sexual deviancy and the exploitation of minors.

Use the Notice of Liability to demand that: the SOGI-123/Comprehensive Sexuality Education (CSE) learning resource be immediately and completely removed from libraries and the education system; all of the books listed, including titles by the same authors, be immediately removed; and that all educational facilities including libraries cease and desist promotion of any and all activities, performers and clubs that exploit vulnerable minors.