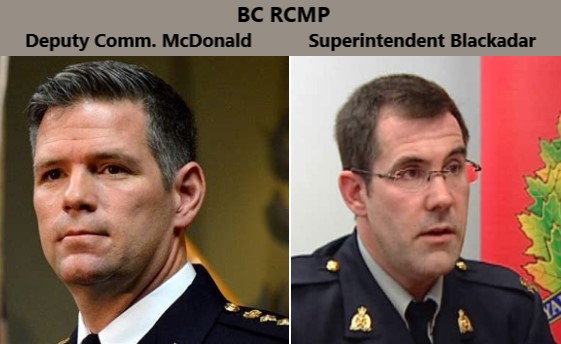 After two years of communicating with the BC RCMP Deputy Commissioner Dwayne McDonald and Superintendent Andrew Blackadar it is evident that they are being delinquent in their duties to serve and protect the citizens of BC.

The following report outlines the founder of Action4Canada, Tanya Gaw’s consistent efforts to advise the BC RCMP that the provincial and federal government’s response to COVID-19 were unlawful, in violation of citizen’s guaranteed and protected rights and a well executed attack designed to destroy our freedom and democracy. In supporting the government’s unlawful actions it would be reasonable to determine that the RCMP are coconspirators to the crimes committed.

In April of 2020, Tanya wrote a report called Government Corruption and Colluding with a Foreign Syndicate. In May 2020 Tanya sent out a Call to Action to the A4C members requesting that they email the report to every Premier in Canada, and demand that they lift the lockdowns and get their citizens back to work. And for them to further read the report and commence an investigation against the Federal government. Despite each Premiers having received the report nearly one hundred times in a matter of days, not a single one responded or acted in the best interest of the citizens they represent. A follow up action was sent in June of 2020. This was a clear indication that they were very likely in on the Global Agenda…which over time proved to be true.

Tanya provided copious amounts of compelling evidence, including an affidavit and death certificates, and offered to arrange for doctors and nurses to give first hand testimonies. Yet, she was repeatedly told they could not present it to the Crown because BC had a higher charge approval threshold to meet than other provinces, and they felt it would not be accepted. However, they wouldn’t even put lead investigators on it to commence an investigation to get the evidence they felt would qualify it.

There is no doubt that when justice is served, Deputy Commissioner Dwayne McDonald and Superintendent Andrew Blackadar will have much to answer for.