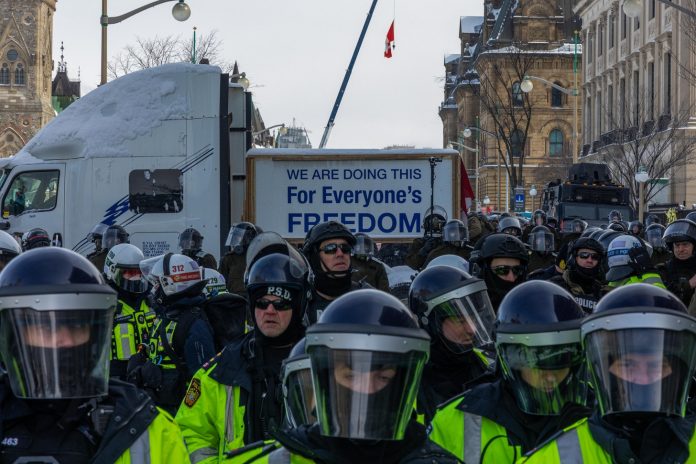 Police face off with protesters on February 19, 2022, in Ottawa, Ontario. (Alex Kent/Getty Images)

Justin Trudeau just created a caste of economic untouchables. Can we stop this dystopian policy from taking hold in America?

Last summer, I warned readers of Common Sense that financial deplatforming would be the next wave of online censorship. Big Tech companies like PayPal were already working with left-wing groups like the ADL and SPLC to define lists of individuals and groups who should be denied service. As more and more similarly minded tech companies followed suit (as happened with social media censorship), these deplorables would be deplatformed, debanked, and eventually denied access to the modern economy altogether, as punishment for their unacceptable views.

That prediction has become reality.

What I could not have anticipated is that it would occur first in our mild-mannered neighbor to the north, with the Canadian government itself directing the reprisals. It remains to be seen whether Canada will be a bellwether for the U.S. But anyone who cares about the future of America as a place where citizens are free to protest their government needs to understand what has just occurred and work to stop it from taking root here.