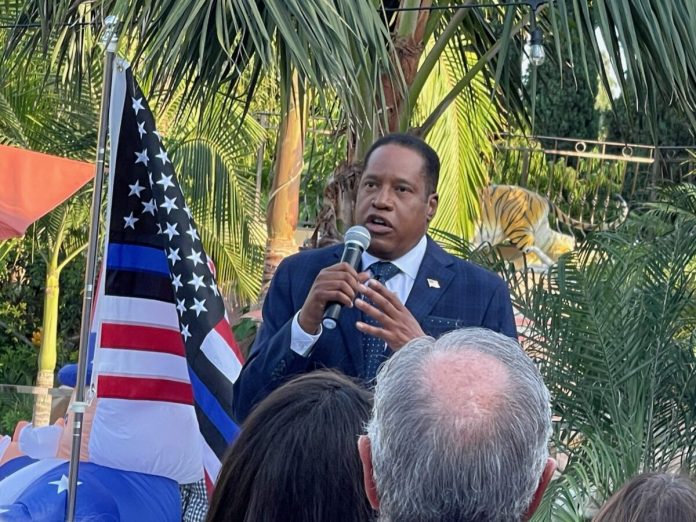 Hopefully Larry Elder will unseat the cabal of the Pelosi-Brown-Newsom triumvirate of destructive control and California can once again become the Golden State in more than just name.

I motored up to Larry Elder’s house for an interview that turned out not to be an interview, at least not in the conventional sense.

It had been scheduled for a couple of days and I had plenty of time to think of some questions, even had jotted a few down, but never asked them.

Elder was just getting off a Zoom press conference when I arrived and we just started talking, no notes, no recording, until he had to go off to yet another conference in his quest to upend Gavin Newsom and become governor of California.

And I’m pretty sure it was better that way, because Larry Elder’s stances on the issues are more well known than just about any political candidate I can think of. He’s been talking about them on air for roughly quarter of a century, often in far greater detail than you ever get from elected officials.

Also, as he was no doubt aware—we have known each other for some time—I pretty much agree with all of them. So I’m the last person to have asked him probing questions.

And the substance was this: How, given the atrocious condition of the state of California and the city of Los Angeles, where I lived for fifty years and he still does, would any sane person not want to try to a new approach to government and a new governor?

Call it the mystery of California. How did the most beautiful piece of real estate arguably in the entire globe turn into—let’s be blunt—a rubbish heap?

I had just seen it up close and personal. Driving up to Elder’s house, I had taken a familiar route up Cahuenga Boulevard into the hills, only Cahuenga was no longer the Cahuenga I had known.

Once the vibrant heart of LA’s, even the world’s, entertainment district, it resembled what you would imagine the back streets in an impoverished neighborhood of Calcutta might look like (with apologies to Calcutta because I have never been there).

The homeless, aka the “untouchables” as they would say in India, were everywhere, interspersed with angry, amphetamine-crazed kids on skateboards flying against traffic, daring you to collide with them, like a scene out of some dystopian horror flick.

It was the kind of place you didn’t want to make eye contact with anybody.

Couple this with the Barrio and South Central remaining what they always were, and you would think it’s time for a change.

I asked Elder if he had detected any change, particularly in the black community. For years he has been called an “Uncle Tom,” “Oreo Cookie,” and so forth for daring to swim against the conventional tide of what’s called “liberalism” in our society. He made an award-winning documentary on the subject.

Elder said that in the last year or so he had noticed some change, but there was still a distance to go, even in the black religious community where you would hope for more responsiveness to a new approach.

Unfortunately, in a recent campaign discussion, he had spoken with a group of black pastors about his view that systemic racism did not exist, how the idea was actually destructive to black people, and got back endless talk of George Floyd and how the police discriminated against people of color, despite the data showing the reverse is true.

They were wedded to a delusion just as white so-called elites are wedded to similar delusions, making California, a land where the rich live like gods while pretending they are helping the downtrodden by mouthing “woke” rhetoric and voting Democratic as a replacement for religion.

I have been told by locals that eventually you just ignore the mayhem around you while returning to your manse on the hill or the beach.

Meanwhile, democracy is dying in ignorance. Whether that ignorance can be overcome is what’s at stake in the California recall election. Elder is working hard to overcome that ignorance in a state that is really a country of its own with the fifth biggest economy in the world.

And he’s clearly not alone. Despite the above mentioned pastors-who-see-no-evil, or at least no evil beyond what they have had drilled into their heads by left/liberal media, people across this state are waking up and Elder’s popularity is great—whether great enough we shall see.

The Clockwork Orange-like atmosphere I witnessed in Hollywood is clearly disturbing a lot of people. Not everyone can afford private security like the Newsoms and Pelosis of the world. Few can.

And matters are made considerably worse because of the “left of Trotsky” district attorneys in Los Angeles and San Francisco who make the cliché “soft on crime” an understatement of monumental dimensions.

So it’s no accident Elder is holding frequent press conferences highlighting what only can be called a crime wave in the state, today’s featuring a woman named Carla Pearson, whose stepson was killed by drunk driver, who was paroled by Gavin Newsom’s parole board.

Yesterday’s had Tania Owen beside him, a retired Los Angeles Sheriff’s Department detective and widow of Sgt. Steve Owen (shot by a gunman in 2016), now head of the Recall George Gascon campaign. (For those who don’t know, Gascon is the LA DA who seems to have some kind of affection for violent criminals.)

And, yes, California is a mystery—how all this came to pass. It’s the mystery of democracy. Can it work if the public doesn’t pay attention—or if they’re consistently lied to?

The Elder campaign may give us an answer, and hopefully a positive one.

It’s been interesting here, to say the least, but I’m returning to Nashville Friday and I can’t say reluctantly. I didn’t leave my heart in San Francisco. I didn’t even go there. That would have been too much.

By the way, Elder has a show on Epoch TV.

Views expressed in this article are the opinions of the author and do not necessarily reflect the views of The Epoch Times.