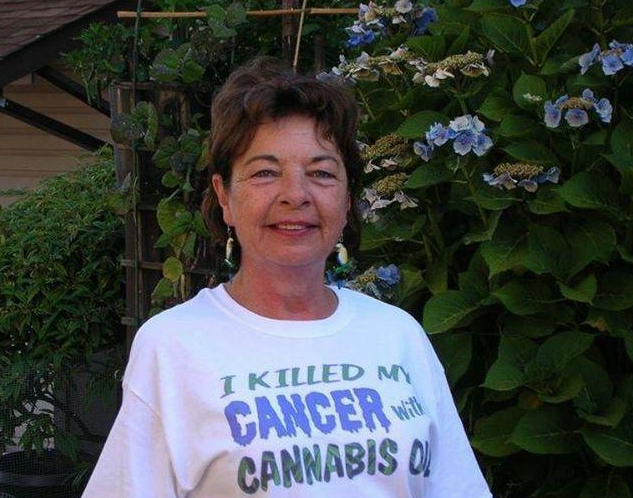 ‘I had resigned myself to a life sentence of pain and agony, and never in my wildes dreams did I imagine I would be pain-free again’

Already suffering with intense chronic pain from Post Sternotomy Neuralgia Syndrome five years after a heart attack and open heart surgery, Yelland was daunted at the thought of the radiation and the consequences thereof, when a friend sent her a copy of the Rick Simpson Story, Run from the Cure.

“After watching the video and hearing Rick and other patients give testimonials about curing themselves of myriad diseases, including end-stage cancers, I was feeling hopeful for the first time,” Corrie shared.

In addition, Yelland said the sheer number of studies from the U.S. National Library of Medicine’s site, Pub Med, on cannabis and its ability to heal were overwhelming evidence of its efficacy.

“But, when I told my oncologist that I’d like to think about it before doing any radiation, he murmured something about a ‘death wish,’ telling me I had two, four, maybe six months to live, and left the exam room in a huff,” she explained.

Simpson, a fellow Canadian from a small town in Nova Scotia, had found an old cannabis oil recipe online, after suffering from his own serious ailments. Once healed, he began sharing the recipe via word of mouth nearly 20 years ago now, with the recipe and Rick traversing the globe ever since.

Undaunted by her oncologist’s response, Yelland began the task of sourcing cannabis to make her own oil. Only able to afford small amounts of plant material at a time, Yelland said she made small batches, ingesting small amounts, slowly getting used to the high THC.

“Ten days into the treatment the pain that had plagued me for four years in my sternum, and the nerve pain, completely stopped,” she informed. “You have to understand, I had resigned myself to a life sentence of pain and agony, and never in my wildest dreams did I imagine I would be pain-free ever again.”

Yelland said she began sleeping through the night, doing away with the sleeping pills she’d needed for years that had only worked up to a couple of hours at a time.

Her entire demeanor changed, with previously cannabis-skeptical friends now commenting on visible changes within her physical stance and mood.

“I evolved from a pain wracked, hunched over, shuffling along individual, to a vibrant, high energy person,” she shared. “Even my complexion improved. I think it’s understandable when I say I get very emotional when I think of how far I’ve come. Cannabis didn’t just change my life, it saved my life.”

Initial reports just weeks after she began taking the oil showed the tumors shrinking, with Yelland penning in a journal, “I know in my heart it’s only a matter of time before I will be completely cured.”

THC, not just for getting high – Read Much More HERE

Corrie was a guest on the Ian Jessop show on CFAX Victoria for a few years until the station terminated Jessop. They then got together doing a podcast called Cannabis Health Radio HERE

Since the show’s inception three years ago, with a brief interlude, they conduction over 250 Potcasts with former cancer patients.