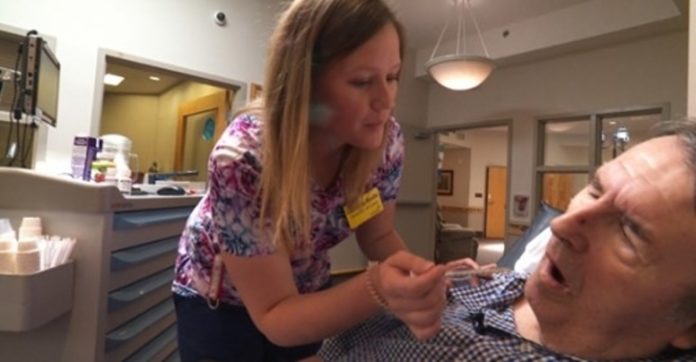 Aggression and other disruptive behaviours linked to Alzheimer’s disease are notoriously difficult to treat, sometimes leading to patients being restrained or medically sedated, but some doctors are now investigating the potential for success with a new strategy: CBD oil.

Family members of patients with dementia say CBD oil, short for Cannabidiol and derived from the cannabis plant, can make a world of difference.

David Scholey’s yelling used to echo through the hallways of his Ontario long term care facility in Fenelon Falls, Ont. Ever since he tried CBD oil two months ago, the 76-year-old’s dementia-related disruptions have declined.

“Within a couple of days you could tell it was working because of the fact that he was a lot quieter, he was a lot calmer,” said Catherine Mantle, a registered nurse and care director at Fenelon Court.

David’s brother, William Scholey also noticed a major improvement. “I think it is wonderful for not only David but for people and family just to see that he is not… as anxious and frustrated,” he said.

William Scholey says “the problem” with sedatives for his brother was that they made it more difficult for David to communicate simple things like which movies he wants to watch.