As much as we like to think biodiesel is a modern breakthroughs, biofuel really isn’t a new development at all. In the 1941 the first prototype car made from and fueled by hemp was constructed by Henry Ford. 70% of the cars body was made of industrial hemp and resin binder along with other cellulose fibres. 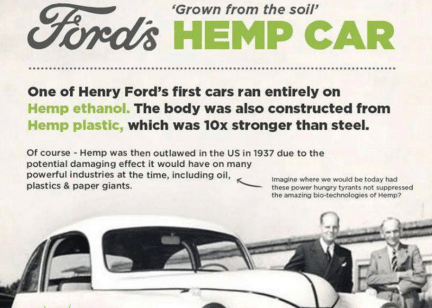 Back in the 20th century marijuana was forbidden in order to suppress the inexpensive hemp fuel and fibre production, so that profits could be made by using petrol, all for tiny groups of people who wanted control and money.  They knew that using hemp would withdraw our economic system and enable the majority of the population to return to wealth and power.

Marijuana and hemp both come from the same plant, cannabis sativa. But Hemp is not smoked. It is the fibre from stalks, stems and sterile seed. By claiming marijuana to be a dangerous drug they effectively prohibited hemp. It has only ever been about control and money.