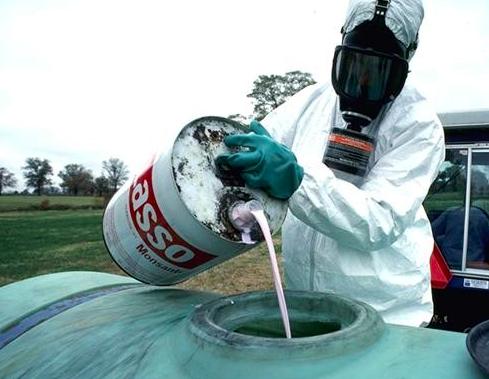 Monsanto is being sued over its new herbicide, created for its D​icamba-resistant seeds.  Spraying of the weed killer resulted in the poison drifting to neighboring fields and killing natural crops that are not genetically modified to resist Dicamba.  Farmers in 25 states submitted more than 2,700 claims to state agricultural agencies against D​icamba for destroying 3.6 million acres of soybeans.

Monsanto thought they had developed an amazing scheme to corner the Midwest farming market when they developed new genetically engineered seeds that were resistant to their new herbicide called dicamba.  The resistance of Monsanto’s new magical seed crops to dicamba meant that the herbicide could be sprayed liberally by farmers to eradicate weeds and boost yields.

Alas, as we pointed out last week (see: Meet Monsanto’s Other Herbicide Problem…), a small problem emerged when spray drifts from those liberal herbicide applications began to wipe out the crops of neighboring farmers who didn’t plant Monsanto’s dicamba-resistant seeds.

Now, as the Wall Street Journal points out today, after allegedly wiping out millions of acres of farm ground across the Midwest, Monsanto once again finds itself in a familiar spot: the courtroom.

Monsanto’s new version of the herbicide called dicamba is part of a more than $1 billion investment that pairs it with new genetically engineered seeds that are resistant to the spray. But some farmers say their nonresistant crops suffered after neighbors’ dicamba drifted onto their land.

The agricultural giant in October sued the Arkansas State Plant Board following the board’s decision to bar Monsanto’s new herbicide and propose tougher restrictions on similar weed killers ahead of the 2018 growing season. Monsanto claims its herbicide is being held to an unfair standard.

Arkansas has been a flashpoint in the dispute: About 900,000 acres of crops were reported damaged there, more than in any other state.

About 300 farmers, crop scientists and other attendees gathered in Little Rock on Wednesday for a hearing on Arkansas’s proposed stiffer dicamba controls, which Monsanto and some farmers are fighting. The proposed restrictions are subject to the approval of a subcommittee of state legislators.