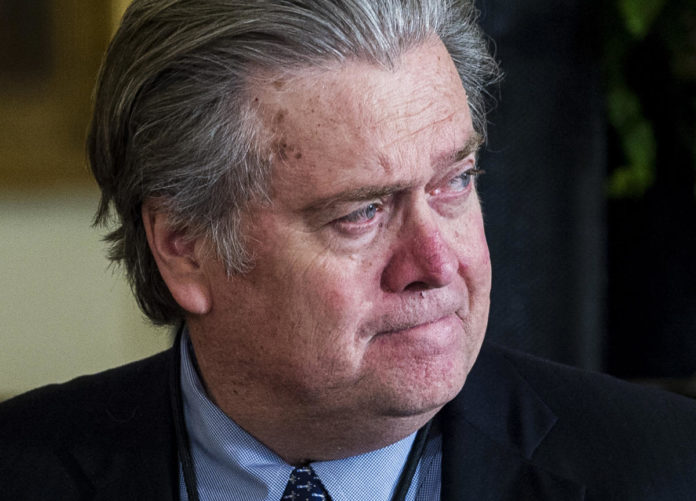 Steve Bannon, President Trump’s former chief strategist, on Saturday rallied evangelicals and other base supporters, urging them to defeat the Republican establishment as they recently did in Alabama and boldly predicting a commanding Trump re-election victory.

“They fear you because they understand you’ve had a belly full of it, and you’re taking your country back,” Bannon told social conservatives at the annual Value Voters Summit in Washington, D.C. “They understand you’re the transmission of the best values of the Judeo-Christian West.”

Bannon was able to channel his and his followers’ long-held distain for the Washington establishment into enough votes to help Trump in his 2016 White House victory.

“In Alabama, the elites, the permanent political class as personified by Mitch McConnell, raised more than $30 million to go after good and righteous man Roy Moore,” Bannon told the crowd.

“The one thing we proved in Alabama, and you guys proved, is that more than anything else money doesn’t matter anymore,” Bannon continued. “In the days of the digital era … a good man with good ideas and good people behind him can beat any amount of money.”

Bannon has now turned much of his attention on McConnell, the Kentucky Republican who is the standard-bearer for the GOP establishment. Like Trump, Bannon is upset that McConnell has thus far failed to execute the president’s conservative legislative agenda, particularly repealing and replacing ObamaCare.

Though Trump has publicly criticized McConnell’s efforts and turned to congressional Democrats for a legislative win, Fox News confirmed Saturday that they are scheduled to meet next week to discuss a path forward.

Bannon on Saturday also came to Trump’s side in his battle with Corker, who has questioned Trump’s ability to lead the country.

“Bob Corker, a real piece of work,” said Bannon, who suggested the senator isn’t seeking re-election in 2018 because he knows he’’ll lose and suggested that GOP senators who didn’t chastise Corker for disrespecting the presidency could also be targeted for defeat.

Bannon said “the populist, nationalist, conservative revolt that drove Judge Moore to victory, that will drive 15 candidates to victory in 2018” will also give Trump 400 electoral votes in 2020.